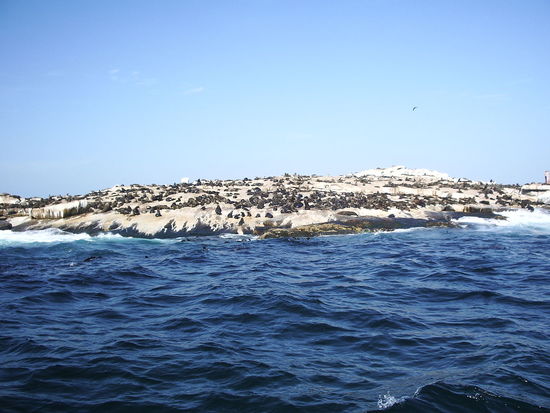 Nobody knows where or why these apex predators have vanished to, but they have disappeared from their feeding grounds at Seal Island in False Bay, South Africa.

Their disappearance has never been recorded before, the city of Cape Town noted. Clearly, something is wrong in this particular ecosystem that is full of Cape fur seals, and it may be due to biosphere collapse.

Great white sharks, which support South Africa’s shark-diving industry and have been responsible for a number of fatal attacks off Cape Town, haven’t been seen in the region for 18 months.

Between 2010 and 2016 staff at the Shark Spotting Programme, established to warn swimmers when the three-ton predators approached beaches, reported an average of 205 sightings of the fish off the beaches of False Bay. In 2018 that fell to 50 and this year not one has been seen. None have been seen at Seal Island, a one-time feeding ground off the coast.

“Further supporting evidence of the absence of these large apex predators is the lack of any feeding or bite marks on whale carcasses the city has removed from False Bay this year,” Cape Town’s municipality said in a statement on Wednesday. “We do not know how their absence from False Bay would affect the ecosystem. Neither do we know the causes for their disappearance

Starving orcas were originally thought to be feeding on the sharks, but that has been dismissed as unlikely by marine biologists familiar with the area.

Shark sightings fell by around a quarter in 2018, compared with average yearly sightings between 2010 and 2016.

More worryingly, not a single shark spotting has been reported so far this year.

“I cannot believe that two orcas would make an entire white shark population disappear from the most important site around the coastline.

Given those figures, Andreotti says she's not surprised by the latest statistics.

“We also did a genetic study to confirm this result and it confirms that the white shark population in South Africa was in very big trouble”.

Great white sharks are apex predators and we do not know how their absence from False Bay would impact the ecosystem, or what has caused their disappearance.

Despite the lack of great white shark activity our tourism operators have managed to view seven gill sharks. Gill sharks were previously not present at Seal Island, and this confirms that there are changes happening within our ecosystem.

The Republican Party of Donald Trump has become so enthralled with Dear Leader that they have abandoned any pretense to...

Sixteen months after the 2020 presidential election Donald Trump is still whining petulantly about the election being "rigged" and "stolen"...

Time and anti-tank weapons favor the Ukrainians even if air superiority remains complicated. An extended siege of Kyiv looks possible...

O’Donnell challenged Vindman on supplying Ukrainians. Thom Hartmann discusses The History of Big Brother In America. Are we repeating COVID...

Short, sweet, to the point and, above all, awesome. Today, Russia announced it was sanctioning President Biden and several other...

(43136)
$0.00 (as of May 19, 2022 21:31 GMT -04:00 - More infoProduct prices and availability are accurate as of the date/time indicated and are subject to change. Any price and availability information displayed on [relevant Amazon Site(s), as applicable] at the time of purchase will apply to the purchase of this product.)