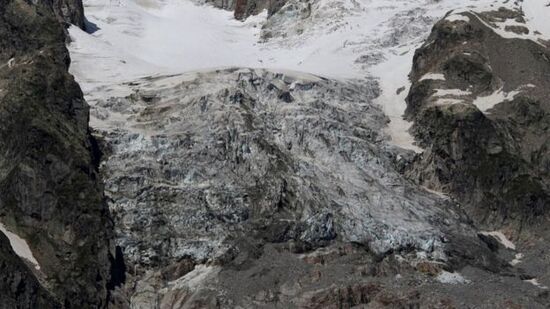 Canada’s last fully intact ice caps have disappeared NASA satellites confirmed.  The two ice caps are in the Northeast of Ellesmere Island, near Greenland. The ice caps formed during the Little Ice Age, they have succumbed to the intense heat waves blanketing the Arctic over the past several years.

From the National Snow and Ice Data Center:

The St. Patrick Bay ice caps on the Hazen Plateau of northeastern Ellesmere Island in Nunavut, Canada, have disappeared, according to NASA satellite imagery. National Snow and Ice Data Center (NSIDC) scientists and colleagues predicted via a 2017 paper in The Cryosphere that the ice caps would melt out completely within the next five years, and recent images from NASA’s Advanced Spaceborne Thermal Emission and Reflection Radiometer (ASTER) have confirmed that this prediction was accurate.

Mark Serreze, director of NSIDC, Distinguished Professor of Geography at the University of Colorado Boulder, and lead author on the paper, first set foot on the St. Patrick Bay ice caps in 1982 as a young graduate student. He visited the ice caps with his advisor, Ray Bradley, of the University of Massachusetts.

“When I first visited those ice caps, they seemed like such a permanent fixture of the landscape,” said Serreze. “To watch them die in less than 40 years just blows me away.”

In 2017, scientists compared ASTER satellite data from July 2015 to vertical aerial photographs taken in August of 1959. They found that between 1959 and 2015, the ice caps had been reduced to only five percent of their former area, and shrank noticeably between 2014 and 2015 in response to the especially warm summer in 2015. The ice caps are absent from ASTER images taken on July 14, 2020.

The St. Patrick Bay ice caps were one-half of a group of small ice caps on the Hazen Plateau, which formed and likely attained their maximum extents during the Little Ice Age, perhaps several centuries ago. The Murray and Simmons ice caps, which make up the second half of the Hazen Plateau ice caps, are located at a higher elevation and are therefore faring better, though scientists predict that their demise is imminent as well.

The European Space Agency reported on the vulnerability of Greenland’s Zachariae Isstrom glacier. They note that the glacier in 2016, was losing five billion tons of ice per year. Zachariae Isstrom is enormous and has a marine extension in the Arctic vulnerable to being eroded from below from warm water upwelling. NASA noted that “Zacharie Isstrom drains ice from a 91,780 square kilometer (35,440 square miles) area of northeast Greenland. That’s about 5 percent of the Greenland Ice Sheet. The glacier holds enough water to raise global sea level by more than 46 centimeters (18 inches) if it were to melt completely. It is already shedding billions of tons of ice into the far North Atlantic each year”.

calving event
near the flank
that was keeping
the glacier stable…

calving zone is nearing
the steep slope below pic.twitter.com/cjSqB5DgIY

Zachariae’s dynamics have been changing over the last few years, calving high volumes of icebergs, which will inevitably affect sea levels. It is estimated that the entire Zachariae Isstrom glacier in northeast Greenland holds enough water to raise global sea levels by more than 46 cm (18 inches).

Scientists have determined that the bottom of Zachariae Isstrom is being rapidly eroded by warmer ocean water mixed with growing amounts of meltwater from the ice sheet surface.

Zachariae and the nearby Nioghalvfjerdsfjorden to its north are two of six glaciers being monitored in near-real time by Sentinel-1 through a new web portal by the UK’s Centre for Polar Observation and Modelling. The portal provides frequent maps of ice velocity of key glaciers in both Greenland and Antarctica.

Many high mountain glaciers have been melting rapidly and the Alps are no exception. Mont Blanc glacier straddles both France and Italy and has been suffering for years from intense heatwaves. A portion of the massif on the Italian side is on the verge of collapse.

The BBC writes on the looming collapse of the Alp’s highest mountain.

Planpincieux glacier, in the Mont Blanc massif, has weakened because of intense summer heat alternating with night-time cold. It lies above Val Ferret valley, near Courmayeur ski resort.

A local environmental risk expert said the fragile ice could fall at any time.

The risk manager, Valerio Segor, said “the water flowing underneath can, in fact, act as a slide” and they faced “the risk of immediate collapse”.

The fragile 500,000 cubic metres (18m cu ft) of glacier is being monitored with aerial photography and radar.

Roads leading to Val Ferret, a popular area for hikers, have been closed off.

A similar alert and evacuation took place last September, because of the unusually hot Alpine summer, attributed to global warming.

A Courmayeur official, Moreno Vignolini, said the heatwave had accelerated the glacier’s melting rate, pushing it as high as 50-60cm (16-23in) a day.