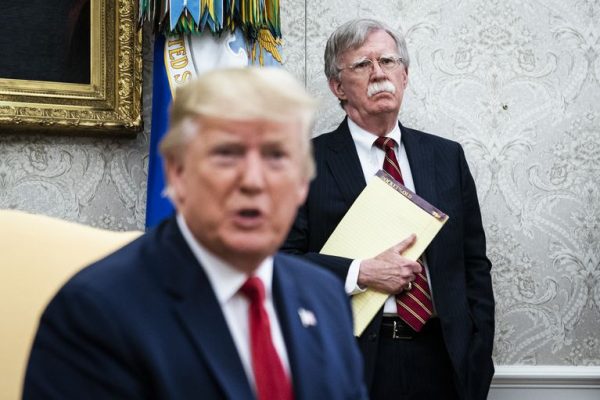 There have been some questions about why the Democrats haven’t been pushing the courts to enforce subpoenas against John Bolton, Mike Pompeo, and others who have either said they have to follow White House orders to ignore a subpoena or who just decided to ignore it on their own. The general response is that Trump’s lawyers would fight it all the way to the Supreme Court and that would take too long.

Now it seems there’s another side to that strategy. Given the current makeup of the Supreme Court, the deciding vote would probably fall to Chief Justice John Roberts. But when (not if) the Senate sits to try Trump, Roberts will be the presiding officer, and it will his decision whether to enforce any subpoenas brought by the House. Since Roberts will get to decide the matter in either case, Democrats have opted for the Senate trial as the faster way to get there.

This was the point made by Adam Schiff over the weekend, as reported by TPM:

CHUCK TODD: And one last thing, on the Senate trial, is one of the reasons you’re not going to fight to try to — in the courts right now for Bolton is that you believe – -there’s this theory that’s been on, I think, Talking Points Memo, a liberal news organization, Josh Marshall. There’s a legal theory running around that it’s a lot easier to get the Chief Justice to compel John Bolton to testify at a Senate trial than it would be waiting around to get him to Congress. Do you buy into that theory?

REP. ADAM SCHIFF: I think that may very well be true. Now, people like John Bolton, whose deputies had the courage to come in and testify, are going to have to answer one day why they saved what they knew for a book rather than tell the country when the country needed to know. But I do think that when it comes to documents and witnesses, that if it comes to a trial, and again we’re getting far down the road here, that the Chief Justice will have to make a decision on requests for witnesses and documents. (from Meet the Press transcript; emphasis added)

This raises two questions for the assembled multitude:

I  think the answer to the first question is Yes. Roberts, for all his conservative ties, is these days more concerned with his place in history, and he is a good enough judge to realize there is no legal basis for such a subpoena to be refused. He is not going to make so obviously biased and partisan a decision that history will mock him for the next ten generations.

On question 2, however, I’m undecided. I’m hoping all 47 Democrats will vote to uphold his rulings (though I keep having doubts about Manchin). That will require 3 Republicans to also agree. I can see Murkowski voting to uphold, but I don’t know where the other two come from.

So: In the matter of the Senate voting to uphold a Roberts order, how say ye?

(By the way, if Roberts thinks the Senate would overrule him, that would give him an extra reason to rule in favor of the House, since he can then claim he did the right thing even though it would have no effect.)

(85815)
$0.00 (as of May 17, 2022 04:11 GMT -04:00 - More infoProduct prices and availability are accurate as of the date/time indicated and are subject to change. Any price and availability information displayed on [relevant Amazon Site(s), as applicable] at the time of purchase will apply to the purchase of this product.)