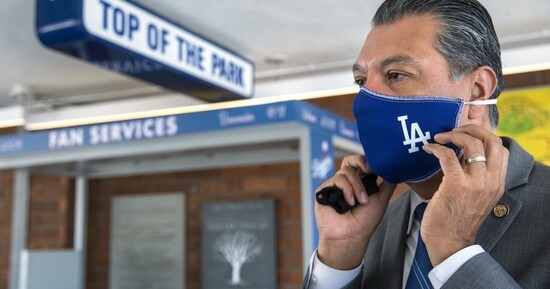 I’ll just be blunt: I’m about to ask if you can pitch in a few bucks to support my friend Senator Alex Padilla’s re-election campaign. But first, I want to talk about why I’m supporting him.

Alex has the bold vision and progressive values that we need in our government—especially at this moment, when we face crisis after crisis.

I sit next to Alex in the Senate chamber, and we’ve already worked together on a number of important issues including legislation that would give essential workers who are undocumented workers much-needed COVID relief and a pathway to citizenship.

Alex’s progressive leadership on this issue makes him a top target of some far-right Republicans.

But if we work together to send Alex back to the Senate, he’s going to win—and he’s going to get results for families across the country.

So please, if you’re able to make a donation at this time, chip in $5 or whatever you can to Alex Padilla’s re-election campaign.

Every donation makes a real difference, and here’s why: the number that matters most today isn’t the total number of dollars. It’s the number of people who are making grassroots contributions to own a piece of this campaign.

The earlier you can donate in a campaign, the bigger the impact you can make—because early investments go further to help build a grassroots team. When you pitch in, and someone else does too, it sets off a chain reaction of support that can move the needle and make a difference.

So if you can, will you make a contribution today to help re-elect Alex Padilla? Let’s make sure he can keep up the fight in Washington.

(22172)
$179.00 (as of May 16, 2022 00:24 GMT -04:00 - More infoProduct prices and availability are accurate as of the date/time indicated and are subject to change. Any price and availability information displayed on [relevant Amazon Site(s), as applicable] at the time of purchase will apply to the purchase of this product.)