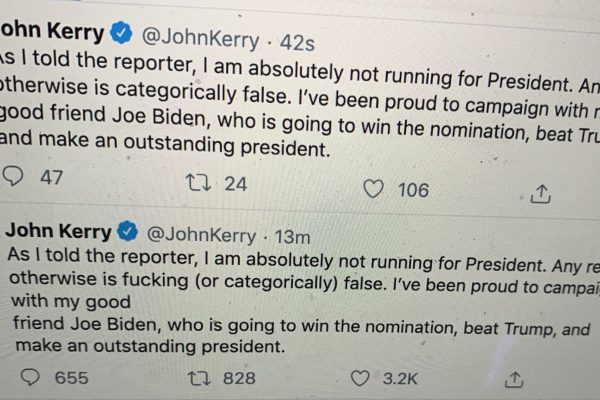 Will scripts get flipped, as the silly season continues. Trump led his Super Bowl appearance whining about how unfair impeachment has been, calling Bernie a communist because he got married in Moscow (he didn’t), and about Hillary Clinton and emails.

Trump claims to Hannity, without any caveats whatsoever, that “me and this administration — we've done more than any administration in the history of our county.” pic.twitter.com/pzDgpVY7Te

John Kerry: “As I told the reporter, I am absolutely not running for President. Any report otherwise is f—— (or categorically) false. IÃ¢Â€Â™ve been proud to campaign with my good friend Joe Biden, who is going to win the nomination, beat Trump, and make an outstanding president.”

The reality of 2004 is that given that there was an available, alternative narrative (jumping off the boat and neutralizing the enemy) than the “rescue” one that was used to combat swiftboating, John Kerry was poorly served by his campaign.

She removed the video but here it is again!

I still would love to buy this gentleman dinner so if you know how I can find him please comment below. Thanks pic.twitter.com/XHvCDdOZZj

The bottom line: This sense of invulnerability is why the White House thought it could get away with hosting a gathering of world leaders at Trump's private club in Doral.

“I swear to God, this guy is the luckiest SOB that's ever lived,” said a former White House official who stays in close touch with current officials. “That's not to say he hasn't done right things. But the flip side is, he's one of these away from a massive F-up.”

Unhappy with Silicon Valley's efforts to curb manipulation of its platforms, the Democratic Party has been monitoring and tackling online disinformation on its own. The Iowa Caucus will be the first 2020 test of its new counter disinformation team. https://t.co/8dmPB0RZym

The DNC's counter disinformation has already had some wins — it has identified coordinated accounts that the social media platforms have removed, as CNN has previously reported. But the DNC staffer CNN spoke to Saturday said that their biggest challenge will likely not come from anonymous bots and blogs.
“The most powerful person in the country is a disinformation agent,” he said, exasperated.
x

Bloomberg's campaign said there was no truth to Trump's remarks: “The president is lying,” a Bloomberg campaign spokesperson said. “He is a pathological liar who lies about everything: his fake hair, his obesity, and his spray-on tan.”#TinyHandsTrumphttps://t.co/Kdd5XrSITA

My son's age group: “Y'all Qaida” is 'the base' as his core calls itself, and that's what it means in Arabic! So Stealthy Dark Money would be the rich, dark side of 'Y'all Qaida' out to choke the democracy that barely bridles capitalism anymore. https://t.co/vNl98sYTWP

Cornel West is a bitter opportunist. His anger with PBO is due to unrequited love because his adoration of Obama wasn't reciprocrated. This article by Michael Eric Dyson is a must read for anyone who wants to understand the petty mind of Cornel West. https://t.co/BuWNctdkgS

(51660)
$17.62 (as of May 22, 2022 02:08 GMT -04:00 - More infoProduct prices and availability are accurate as of the date/time indicated and are subject to change. Any price and availability information displayed on [relevant Amazon Site(s), as applicable] at the time of purchase will apply to the purchase of this product.)