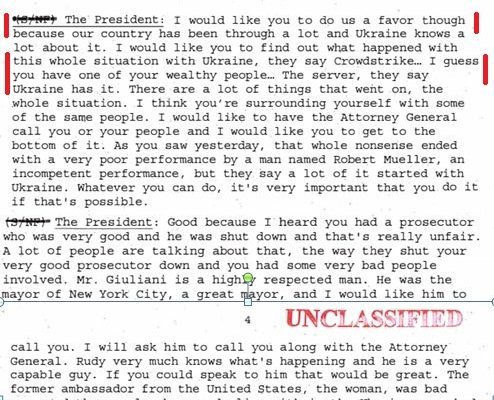 A desperate Trump imagines himself in numerous ironies in advance of must-see TV.

But you didn't. You didn't sign the Whistleblower Protection Act. The law in its present form was signed by President Clinton in 1998. You are a liar and an idiot @realDonaldTrump, which is why you are going to be impeached. https://t.co/0iDDWAUKCRÃ¢Â€Â” Elizabeth de la Vega (@Delavegalaw) November 11, 2019

Trump has, per usual, thrown out a barrage of defenses, hoping something will stick. So far nothing has. Here are the key defenses he’s tried and those he’ll likely move on to next, and why they all fail.

The Reality: Trump has called for the whistleblower’s name to be disclosed, but whistleblowers aren’t required to come forward and there are good reasons to protect them when they choose not to. Whistleblower laws protect the identity of these anonymous truthtellers so they can expose government abuse and fraud without subjecting themselves to workplace reprisals or worse. Even Senator Chuck Grassley, a Trump ally, said the whistleblower’s identity should be protected. Whistleblowers are tipsters whose information leads to opening an investigation. If the tip is untrue, the investigation will not pan out. But if it is — and virtually everything the whistleblower in this case said has been confirmed — then they have done an enormous service to the country. Here, aid for Ukraine was released just days short of a scheduled announcement by Zelensky on opening an investigation that could have affected the course of our future election. This is precisely what our founding fathers wanted to prevent when they condemned foreign influence in our elections. If the whistleblower isn’t a firsthand witness who’ll testify at trial, the tip ends their involvement. There isn’t a requirement in criminal cases that prosecutors disclose their identity if they don’t testify. And outing the whistleblower could deter future whistleblowers from coming forward.

In a plot twist, the whistleblower who made the complaint about Trump’s conduct offered to answer questions in writing. The President, who notoriously declined to sit for an interview with Special Counsel Robert Mueller and submitted answers on carefully limited topics, reacted vehemently to the whistleblower’s offer: “Written answers not acceptable!”

Then there’s the circularity of crimes attempted and committed which for some GOP, “is not impeachable” even as bribery is prominently featured separate from “high crimes and misdemeanors”. And then there’s also all that felonious conspiracy.

The Defense: Bribery isn’t a crime unless the bribe succeeds.

The Reality: You don’t have to be successful at committing a crime to be guilty. Attempt is a crime. (Of course, impeachment doesn’t require a crime, but since many conservatives argued during the Mueller investigation that the President should be impeached only if he committed one, it’s worth pointing out that the conduct here was likely criminal.) Trump’s former UN Ambassador Nikki Haley defended him in an interview, saying, “You’re going to impeach a president for asking for a favor that didn’t happen and – and giving money and it wasn’t withheld?” Yes, absolutely. The Constitution clearly states that bribery (which Congress has specified includes attempted bribery) is an impeachable offense. It’s bribery for a public official to “corruptly demand” or “seek” a personally valuable favor in exchange for taking official action or violating his duty to act (like withholding congressionally allocated aid to Ukraine). The crime doesn’t and shouldn’t hinge on whether the criminal is lucky enough to get away with it. Trump is no less guilty because he failed to pull it off. This argument sets an embarrassingly low standard for what we expect of any elected official, let alone our President.

Then there’s the sublimity of the ridiculous:

Excellent idea.
Subpoena Ivanka for testimony under oath about Trump finances, foreign emoluments, financial conflicts of interest in Turkey and China, and a lot more.

Darn that drug deal, but he is cooking it up with gaslight:

In order to continue being the most Transparent President in history, I will be releasing sometime this week the Transcript of the first, and therefore most important, phone call I had with the President of Ukraine. I am sure you will find it tantalizing!

#ExtortionistTrump
BriberyÃ¢Â€Â“ 18 USC Ã‚Â§201(b) any public official who Ã¢Â€Âœcorruptly demands, seeks, receives, accepts, or agrees to receive or accept anything of value personally or for any other person or entity, in return for…being influenced in the performance of any official actÃ¢Â€Â pic.twitter.com/YHSPXoByjX

(51650)
$17.62 (as of May 21, 2022 11:06 GMT -04:00 - More infoProduct prices and availability are accurate as of the date/time indicated and are subject to change. Any price and availability information displayed on [relevant Amazon Site(s), as applicable] at the time of purchase will apply to the purchase of this product.)