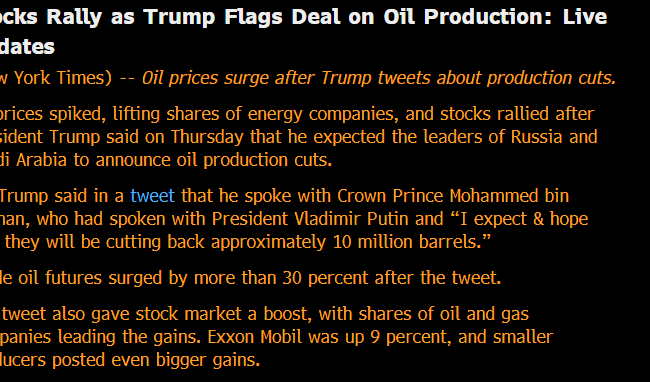 More than a few folks probably made money because Trump hinted he was “going to do something” yesterday in his presser. Not the first timing, because it’s not really hinky, is it. Or are there suckers not keeping track of an upcoming meeting of Trump with oil CEOs tomorrow. Darn these disinformation stunts to pressure decisions not made by the principals.

Just spoke to my friend MBS (Crown Prince) of Saudi Arabia, who spoke with President Putin of Russia, & I expect & hope that they will be cutting back approximately 10 Million Barrels, and maybe substantially more which, if it happens, will be GREAT for the oil & gas industry!— Donald J. Trump (@realDonaldTrump) April 2, 2020

…..Could be as high as 15 Million Barrels. Good (GREAT) news for everyone!

The S&P 500 Index rose more than 2% after CNBC reported that the president would announce cuts to global oil supplies after discussions with Russia and Saudi Arabia. Crude surged past $24 a barrel, Chevron Corp. lead all gainers on the benchmark. Ten-year Treasury yields edged lower, and the dollar gained against major peers.

$USO May $6 calls had 8500 calls at $0.46 the yesterday was trading ~$0.16 betting for Russia joining Saudi Arabia with OPEC+ decision to cut #OIL production

(43137)
$0.00 (as of May 19, 2022 18:32 GMT -04:00 - More infoProduct prices and availability are accurate as of the date/time indicated and are subject to change. Any price and availability information displayed on [relevant Amazon Site(s), as applicable] at the time of purchase will apply to the purchase of this product.)