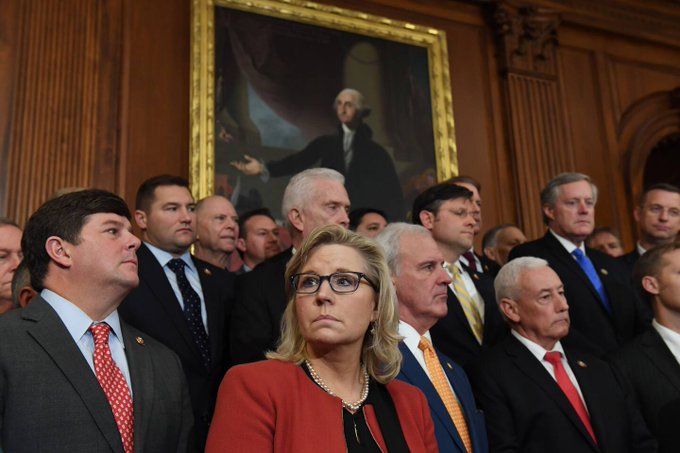 Fear of a Red Hat: as much as Liz Cheney is toast, more troubling is Elise Stefanik’s Führereid, because Trump is too stupid to see that he’s blazing an even tighter path to obscurity. As Greg Sargent observes, there is an increased likelihood of another attempt at stealing an election, further pimped by Trump.

“If she wins, Stefanik would become the sixth different GOP conference chair in 13 years — a turnover rate that rivals the drummer for Spinal Tap.”

Cheney was alarmed, she later told others, in part because Republican campaign officials had also left out bad Trump polling news at a March retreat for ranking committee chairs. Both instances, she concluded, demonstrated that party leadership was willing to hide information from their own members to avoid the truth about Trump and the possible damage he could do to Republican House members, even though the NRCC denied any such agenda.

Those behind-the-scenes episodes were part of a months-long dispute over Republican principles that has raged among House leaders and across the broader GOP landscape. That dispute is expected to culminate next week with a vote to remove Cheney from her position as the third-ranking House Republican.

At issue: Should the Republican Party continue to defend Trump’s actions and parrot his falsehoods, given his overwhelming support among GOP voters? Or does the party and its leaders need to directly confront the damage he has done?

What also seems unavoidably at stake is that the GOP appears to be plunging headlong into a level of full-blown hostility to democracy that has deeply unsettling future ramifications.

The @Liz_Cheney ouster is about more than loyalty to Trump. It shows the GOP effectively liberating itself to overturn future elections whose outcomes Republicans hate, by any means necessary. Note that these same House Rs may be in control on Jan 6, 2025:https://t.co/0MuOzRfDuO

Loyalty to Trump and his lies isn’t the most important thing Republicans are asserting here. Instead, Republicans may be unshackling themselves from any obligation to acquiesce to future presidential election outcomes they don’t like — that is, liberating themselves to overturn those outcomes by any means necessary.

But there’s plainly a darker factor at play. Whatever Cheney’s other flaws — her neoconservatism, her association with another assault on the rule of law amid the war on terrorism — she’s demanding something important from fellow Republicans.

It’s this: A full and unequivocal renunciation of the lie that the election’s outcome was dubious. A complete and unambiguous reckoning with the fact that Trump absolutely did try to incite mob violence to rupture the peaceful conclusion of his election loss to stay in power illegitimately.

“We should start to very much worry about what Jan. 6, 2025, looks like,” Edward Foley, a renowned election law scholar and a Post contributing columnist, told me.

Imagine a 2024 election decided in one state, where a GOP-controlled legislature sends electors for the GOP candidate in defiance of a close popular vote. The same House Republicans who punished Cheney — many of whom already voted against President Biden’s electors, but now control the House and have continued radicalizing — could vote to certify that slate.

“The core component of the democratic process is that we count the votes as cast,” Foley told me. The punishing of Cheney, Foley concluded, suggests that the Republican Party might be institutionally “abandoning the very essence of democracy.”

So why is Trump giving Stefanik his “COMPLETE and TOTAL endorsement” to replace Cheney? Because none of these votes matter to the former president. This is not about ideology or public policy. It’s not even loyalty to Trumpism. It’s about loyalty to Trump. And even though Cheney supported Trump’s agenda in Congress, she must be purged because she supported impeachment and the certification of the election — and refuses to apologize for it.

Why is Trump giving Elise Stefanik his “COMPLETE and TOTAL endorsement” to replace Liz Cheney?

Because none of these votes matter to the former president, @marcthiessen writes: https://t.co/0zNYCNvm4A

House Republicans are preparing to oust Rep. Liz Cheney (R-Wyo.) from the No. 3 Republican position in the House and replace her with Rep. Elise Stefanik (R-N.Y.). Why? Is Stefanik more conservative than Cheney? No, Cheney has an 80 percent lifetime rating with Heritage Action for America compared with a 48 percent rating for Stefanik.

Well, did she vote more loyally with President Trump? No, Cheney voted with Trump 92.9 percent of the time, while Stefanik voted with Trump just 77.7 percent of the time. Indeed, Stefanik steadfastly opposed key elements of the Trump agenda. She voted against Trump’s singular legislative achievement — his 2017 tax reform bill — and against making his tax cuts permanent. She voted to block Trump from withdrawing from the Paris climate accords. She voted to condemn Trump for calling on the courts to invalidate the Affordable Care Act. She voted to overturn Trump’s emergency declaration at the southern border so he could fund the border wall, and then voted to override Trump’s veto of a bill that reversed his emergency declaration. Trump calls Cheney a “warmongering fool” who wants to “fight ridiculous, endless wars,” but Stefanik voted with Cheney to oppose Trump’s withdrawal of U.S. forces from Syria.

House Republicans say Cheney is a distraction from their efforts to win back the majority in 2022 and check the Biden administration’s worst excesses. Sorry, it is Trump who is attacking Cheney and insisting the election was stolen. She just refuses to go along with that lie. What is the bigger distraction? Cheney’s tweets responding to Trump? Or the House Republican leadership feeding the left-wing media with weeks of drama over GOP fratricide with this shameful effort to purge her?

After the Trump-backed insurrection was cleared from the U.S. Capitol, Stefanik delivered a floor speech that alleged fraud in Georgia, Michigan, Pennsylvania and Wisconsin — enough electoral college votes to block Biden’s victory.

“Tens of millions of Americans are concerned that the 2020 election featured unconstitutional overreach by unelected state officials and judges,” she said.

Now, four months later, Stefanik is vowing behind the scenes to complete her political transformation into full-time MAGA supporter to knock out Cheney.

As Trump put it Wednesday, “Elise is a tough and smart communicator!”

Some advisers are urging Trump NOT to support Kevin McCarthy for Speaker if Republicans win back the House in 2022 — and Trump is intrigued by the idea. My latest on a post-presidency Trump, w @jdawsey1. https://t.co/Hv9ok24AWC pic.twitter.com/XIYmsgmCr9

One of the questions doctors ask patients to test for cognitive decline is, “Who is the president?”

The MAGA cult’s answer will hurt their score, but the only error will be in assuming this represents a decline.