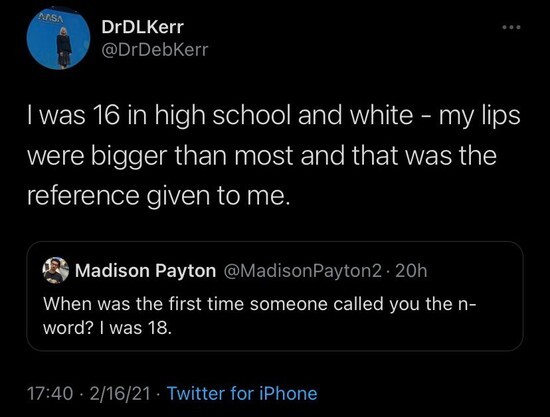 A white candidate to be Wisconsin's top education official deleted her Twitter account and apologized after posting a message that she had been called a racial slur for Black people when she was 16 because “my lips were bigger than most and that was the reference given to me.”

Deborah Kerr posted the message on Tuesday evening, the day of Wisconsin's primary for state superintendent of schools. Kerr was the second-highest vote-getter in the primary and advanced to the April general election.

The tweet from Kerr's account came in response to a question posed by the host of a podcast called Race Through Education, Madison Payton, who is also coordinator of curriculum and instruction at a New York City high school. Payton asked: “When was the first time someone called you the n-word? I was 18.”

Kerr responded: “I was 16 in high school and white — my lips were bigger than most and that was the reference given to me.”

After Kerr sent her tweets Tuesday night, several Twitter users pointed out that the question was not intended for white people to answer and her response minimized the experience of Black people who are called the slur.

Nijeria Boone, a 22-year-old who attended Brown Deer schools when Kerr was the superintendent of the district, was among those responding to Kerr's tweets. Boone said she had been called the N-word every year when she was in high school.

“You can’t equate someone saying that to you as a white person to the trauma that these Black kids are experiencing hearing the N-word,” Boone said in an interview with the Journal Sentinel.

After tweeting in response to Kerr's comments, Boone shared a screenshot showing that Kerr had blocked her. Others also said they were blocked by Kerr, including Bria Smith, a board member for March for our Lives from Milwaukee.

Boone and Smith said Kerr should be listening to the feedback.

“Simply listening to the Black voices she offended could bring cultural awareness and sensitivity on her campaign,” Smith said in a statement. “Blocking Black womxn is a demonstration of white suppressive power, the same racial inequity that’s affected Wisconsin for years.”

“I do not shy away from conversations about race,” she added. “In fact, I am very vocal about racism as it exists in its many forms and I intentionally point to it when I see it. I apologize for having posted something that was intended to be a part of the discussion of racism. I will continue to serve as a champion against racism in our schools and in our communities.”

“It’s called reading the room,” he said. “You can engage your community about race by asking questions and wanting to understand … especially if you know that you are not from that community, you do not go in adding your experience.”

“At the end of the day you will never have the experience and be in the position of a person that has been called directly (the N-word),” he continued. “You need to just ask questions and listen.”

Alanna Conley, spokesperson for Underly's campaign, lambasted Kerr for her Tweet in a statement Wednesday.

“State Superintendent is a serious job that requires sound judgement and a focus on what’s best for students,” Conley said. “We think the people of Wisconsin have had enough of political leaders tweeting nonsense.”

The election is April 6th. This is the first major race in the Biden era and Wisconsin Democrats are gearing up to help Dr. Jill Underly (D. WI) win. Received this e-mail today from the Wisconsin Democratic Party:

This is a long email, but please bear with me, because it’s important.

On April 6, Wisconsin voters will have a chance to vote for a new State Superintendent of Public Instruction—Governor Tony Evers’ old job. This person will be the head of public schools in the state of Wisconsin. This will be our first statewide general election since we elected President Biden.

Our schools are at a crossroads. The pandemic has disrupted learning for all K-12 students in Wisconsin, and it has exacerbated longstanding opportunity gaps that harm students of color, rural students, and students from lower-income families. We need a leader with the vision to not just reopen schools safely, but to build them back better, fairer, and more equitable than ever before. We have no doubt that Dr. Jill Underly is that leader.

Most people aren't following this race. But it’s time to tune in. Voucher school advocates certainly are. Right-wing billionaire Arther Dantchik, a Betsy DeVos ally, is the biggest donor in the race—and he helped make Deborah Kerr, Jill’s opponent, the top-raising primary candidate. And Dantchick isn’t the only enemy of public schools backing Kerr. She’s been endorsed by school voucher activists (and DeVos fans) George and Susan Mitchell, who have pushed hard to privatize education in Wisconsin for years.

Jill Underly’s lifelong commitment to public education and lifting up every student has defined every step of her career, and shines through her record of service to students from pre-kindergarten through college — as a teacher, a principal, a mentor, and a district superintendent.

Rather than expanding the diversion of public funds into private schools, Jill is a champion of fully funding public schools to meet the needs of ALL students. She is the best DPI candidate for Wisconsin, and we look forward to helping voters cast their ballots for her on April 6.

We all have a lot to do to ensure that Dr. Underly comes out and I’m prepared to do everything it takes. If you’re ready to join us, could you share our endorsement on Facebook right now and tell us why you’re supporting Dr. Jill Underly for Superintendent of Public Instruction.

This may seem like a small thing, but it matters. Lots of voters spend countless hours on Facebook, and by sharing our endorsement—and commenting, liking—you’re helping ensure that Wisconsin voters see our endorsement of public school champion Jill Underly. So I hope you’ll take a minute to take this important action.

Thanks for everything, more soon,

P.S. — If you don’t use Facebook, you can also retweet my Twitter endorsement thread and tell us there why you’re supporting Dr. Underly.

Click here to donate and get involved with Underly’s campaign.