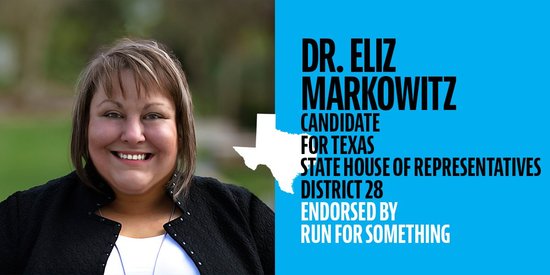 I’m writing about an important race here in Texas.

With our help, Eliz Markowitz can win a special runoff election and increase our chances of producing a Democratic majority in the Texas state house.

This has huge implications for 2020.

This election will be an initial test of our ability to win other races across the state, including for Congress and U.S. Senate. And — it will give us an indication of our ability to deliver Texas’ 38 electoral votes to the Democratic nominee for president.

Though Donald Trump won House District 28 by ten points in 2016, Eliz came in first place in the election earlier this month against a number of well-funded Republicans.

But she is now in a runoff against a Republican who’s loaned his campaign hundreds of thousands of dollars. Eliz is at serious risk of being outspent. And we are at risk at losing this great opportunity for Texas and the country.

Can you make a $35 donation right now to Eliz’s campaign? Flipping House District 28 from red to blue could not be more important.

I’ve been on the ground with Eliz, knocking on doors in her district. I’ve seen the positive response this former educator gets from Democrats, Independents and even Republicans when she talks about improving public education, confronting climate change and investing in healthcare.

You and I have seen firsthand what’s possible when Texans come together to build a true grassroots campaign. We know that if enough of us step up to the plate and support her, Eliz can win District 28 and help us take back Texas and the country.

Thank you for making a donation today. It means a lot.

(51660)
$17.62 (as of May 21, 2022 23:52 GMT -04:00 - More infoProduct prices and availability are accurate as of the date/time indicated and are subject to change. Any price and availability information displayed on [relevant Amazon Site(s), as applicable] at the time of purchase will apply to the purchase of this product.)