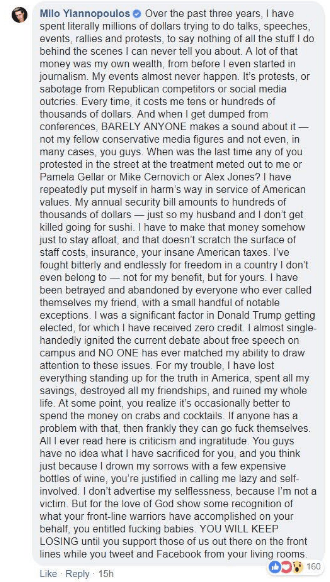 I was legitimately afraid that white supremacists would become an organized force in American politics after they put one of their own in the White House. For a time that seemed plausible, but now, going down the list of “Hey, whatever happened to”:

Unite the Right 2 organizer, Nazi failure Jason Kessler gets yelled at by his dad for being a Nazi while livestreaming w Nazi loser Patrick Little, who admits he may have to sell the boat he's broadcasting from at a loss because he needs money. pic.twitter.com/skmlmtdSAEÃ¢Â€Â” FlyingOverTr0ut (@FlyingOverTr0ut) August 14, 2018

And what about Milo the Pedophile?

I recall being told by several leftists not to fight the alt-right.  By denying them a platform, they would only grow louder and stronger. I think I can safely say that was a stupid line of thinking—we made a lot of noise, made them toxic, got them banned, and they are suffering for it. In short, we have been kicking their collective ass. There is no prominent figure on the alt-right who is doing particularly well.

The movement is mocked, ostracized, relentlessly pursued, and is fraying.

So naturally, the media says they are winning:

The White Nationalists Are Winning

Fox News anchors and high-profile politicians are now openly pushing the racism of the alt-right. The fringe movement’s messages have permeated the mainstream Republican Party.

As long as that agenda finds a home in one of the two major American political parties, a significant portion of the country will fervently support it. And as an ideological vanguard, the alt-right fulfilled its own purpose in pulling the Republican Party in its direction.

Yeah, exactly.  But this isn’t a good thing for the GOP. The media chooses to look at this as the GOP bringing the alt-right up, but I see it as the alt-right tearing the GOP down.

An entire generation is coming of age (voting age) identifying the GOP as the party of hatred, racism, and violence. (Even their decades-old claim to be a party of “religion and values” is completely over with their fanatical support of Trump.) They have absolutely nothing, which is why they are blatantly bringing Nazis into the fold.  Ron DeSantis is openly racist against Andrew Gillum and Puerto Ricans, GOP nominee Seth Grossman called diversity “a bunch of crap”, and the GOP Senate nominee from Virginia openly supports the alt-right and displays the Confederate flag at rallies. Several republican nominees for Congress are proud Holocaust deniers. No republican leader can openly condemn bigotry anymore.

Well, you own this GOP. This is all you.

Let me be clear:

Aligning yourself with a rapidly sinking movement isn’t a “win” for the right, it ensures victory for us.

The GOP is now the party of Trump. All their feeble efforts to “win over” Hispanics and all other groups they need have been completely wiped out. Yes, they have solidified their lock on the old, racist, white male votes; but there are fewer and fewer of them in every single election, and more of everyone else. No amount of voter suppression or gerrymandering is going to fix that dynamic. Sooner or later, your entire, horrible party will become irrelevant.

If we all commit to vote and to ensure we work to bring new voters to the polls, we can ensure this happens sooner.

(51660)
$17.62 (as of May 21, 2022 22:20 GMT -04:00 - More infoProduct prices and availability are accurate as of the date/time indicated and are subject to change. Any price and availability information displayed on [relevant Amazon Site(s), as applicable] at the time of purchase will apply to the purchase of this product.)