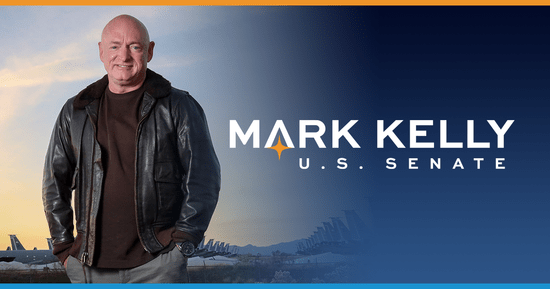 It’s not enough to elect a Democratic president and hold our House majority in 2020. The future of everything we care about—the Supreme Court, women’s reproductive freedoms, gun safety, the environment, health care—depend on Senate control.

We must take back the Senate and end Mitch McConnell’s tenure in the majority.

That’s why I’m beyond proud to endorse my dear friend, Mark Kelly, for Senate in Arizona.

I’ve known Mark for well over a decade—his wife, Gabby Giffords, and I, met as freshmen Congresswomen back in 2006. I count our friendship among the greatest blessings of my time in Washington.

A retired Navy combat pilot, engineer, and NASA astronaut, Mark is one of the smartest, steadiest, and most dedicated people I know. I’ve watched him face the unimaginable, after Gabby was shot and nearly killed at a “Congress on Your Corner” event near Tucson in 2011, with unwavering strength and grace.

And I’ve watched him fight alongside Gabby for commonsense, bipartisan solutions to gun violence, bringing the voices of veterans, law enforcement, and gun owners to the movement.

That’s the kind of leadership we need in Washington.

Meanwhile, Mark’s opponent, Sen. Martha McSally, is in Trump’s back pocket, voting with him 95% of the time. That’s not sitting well with Arizona voters: The Hill just ranked Sen. McSally among the five most vulnerable Senators in 2020, and the latest polls have them neck-and-neck. We can win this race, with your support.

Please, help me raise $15,000 for Mark’s campaign by midnight tonight. Any amount you can give will help us get there. Here’s the best link: secure.actblue.com/donate/ots_kelly

P.S. Here’s one of my all-time favorite photos of Mark, Gabby and I.