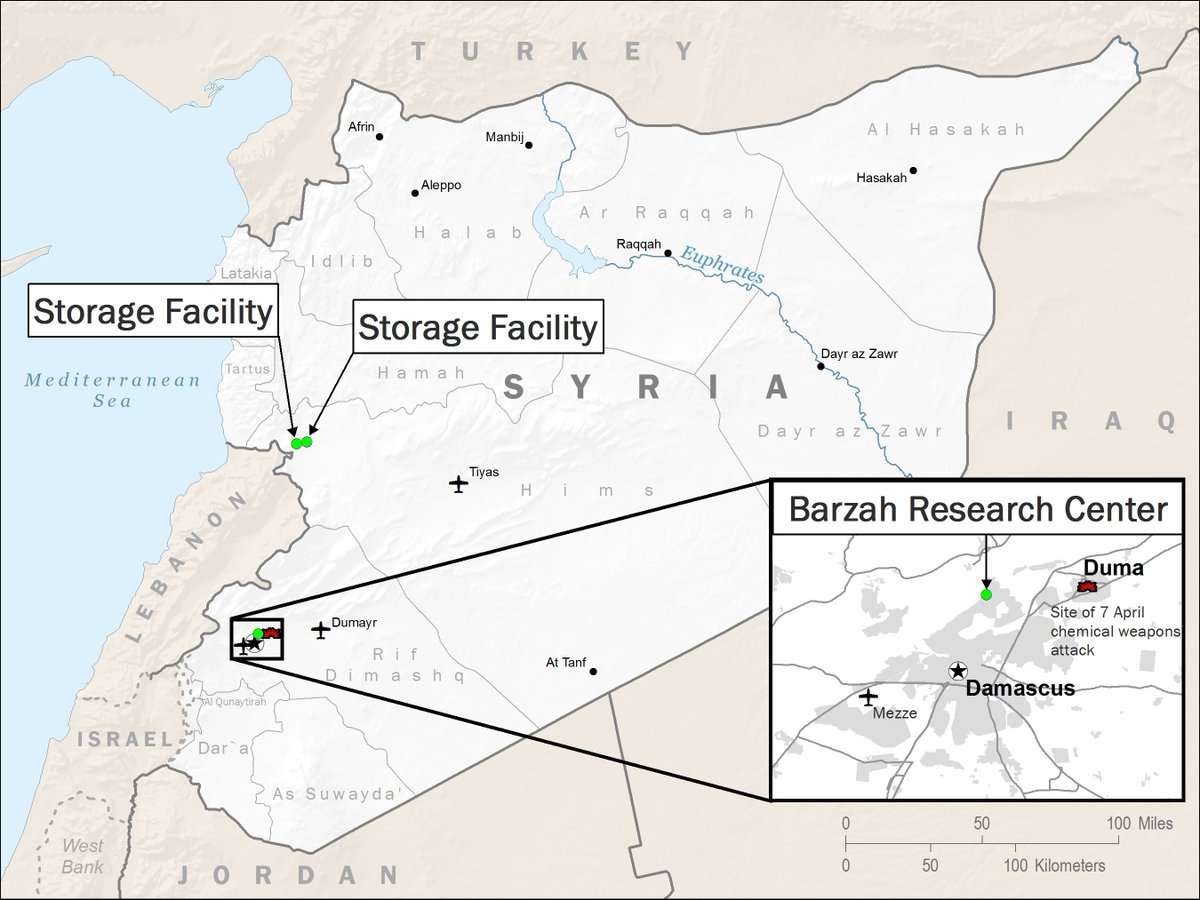 A new day. Information will trickle out over time, but let’s begin with what we know now.

Let us start with the Pentagon briefing.

They focus their maps and discussion on just these three sites. We’ll get into secondary sites a bit later.  They offer the following before-and-after comparisons of their targets:

Unfortunately I have not found a higher-resolution image of these graphics.

One may note that regardless of the resolution of the graphics, the raw images themselves are relatively low resolution. This is standard practice from Pentagon releases; they use imagery from public space imaging companies rather than from their own satellites. Why? For the simple reason that they don’t want to indirectly reveal their imaging capabilities.

Concerning Barzeh, we can do a better comparison, thanks to Elliot Higgins:

Note the change in the northwest.  Here’s a higher resolution image of that facility:

Images from SANA (Syrian state news can be geotagged to the building), as Higgins has also done:

More images from SANA are available of the site:

The other sites are more remote, more sensitive, and likely contaminated, so no ground images are yet available.

The fate of secondary sites, which appear to largely if not entirely be air defense sites, isn’t as clear.  Fires have been burning at an air defense base in Suwayda, for example:

Trump has called it a “perfectly executed strike” — “Mission Accomplished”. The Pentagon denied that any missiles at all were taken out — a claim that I find dubious. At the same time, Russia claimed that the Syrian government shot down “71/103” cruise missiles, a claim that’s outright laughable. I tend to find the Syrian government’s earlier claims of 13 missiles shot down to be a realistic figure.  The reality is that both the US and Russians have a pretty good understanding of the capabilities of the others’ systems, and how heavily they have to saturate an airspace to penetrate it. Nobody’s going to be surprised with an astounding success or astounding failure here.

The Syrian government has given their own press briefing:

They say 110 missiles were fired, acknowledging hits to “an educational center and scientific laboratories”. They continue referring to the attack as the “Triple Aggression”.

In addition to Russia’s threat of repercussions to the attack last night, Iran has added one of their own today.

The OPCW plans to continue their operations in Douma.  France has released a detailed dossier about the chemical attacks, as well as earlier attacks from the Syrian government. It includes 44 allegations of chemical weapons usage by the Assad government since the attack on al-Dumayr, of which they were able to confirm 11 of them — all of them chlorine except for one, which was a nerve agent.

Why would the U.S. detonate a nuclear weapon in Nagasaki when they were already winning the war? How do we know it wasnÃ¢Â€Â™t the White Helmets creating a fake explosion set in a studio somewhere….?

(22172)
$179.00 (as of May 16, 2022 03:47 GMT -04:00 - More infoProduct prices and availability are accurate as of the date/time indicated and are subject to change. Any price and availability information displayed on [relevant Amazon Site(s), as applicable] at the time of purchase will apply to the purchase of this product.)