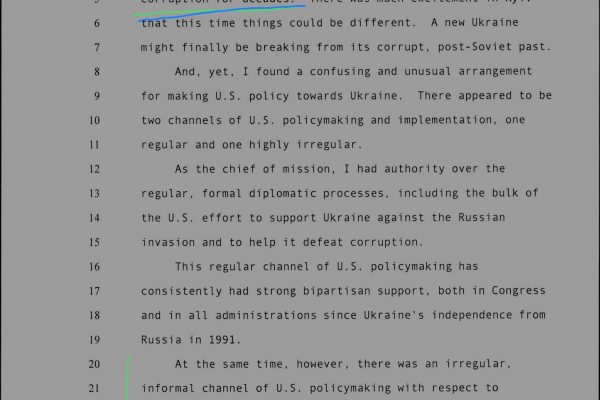 Taylor identified the “second channel” of the amigos reporting to Giuliani, as well as indicating that his notes are in the custody of the State Department.

1. A second quid pro quo?
The quid pro quo that we knew Taylor had explicitly outlined was one involving military aid; he said he had been told that Sondland told the Ukrainian official that the investigations Trump wanted would need to be announced for the aid to go through.
But in his further testimony, he also indicates he was told in some slightly less-certain terms that there was a quid pro quo involving a meeting with Trump.

2. He points the finger at Giuliani, not at Trump personally
I wrote earlier Wednesday about how the testimonies of Volker and Sondland appears to be pointing in the direction of Republicans laying all this at the feet of Trump’s lawyer, Rudolph W. Giuliani. The two of them suggested they never had an explicit quid pro quo conveyed to them, and Sondland said he instead just “presumed” one was in place. What’s more, they both indicated Giuliani’s actions were problematic, if not illegal.

And Taylor’s testimony also stops short of directly implicating Trump. Taylor indicates the quid pro quo was coming from Giuliani and said he didn’t know if Trump was behind it.

3. Taylor is going to be a very important witness next week
Taylor is one of two witnesses slated for the first public hearing of the impeachment inquiry next week, along with George Kent. And his testimony on Nov. 13 is looming larger than ever.

Volker and Sondland have shown that they aren’t terribly interested in blowing the lid off the Ukraine scandal, with Volker denying knowledge of a quid pro quo and Sondland only disclosing his after others implicated him (he issued a clarification to his testimony on Monday).

Taylor, by contrast, seemed to come into the job wary of the Giuliani set-up, and he describes a process of gradually having his worst fears confirmed. He also says he has “always kept careful notes, and I keep a little notebook where I take notes on conversations, in particular when I’m not in the office.”

Taylor will be testifying next week on Wednesday in open session.

MR. KRISHNAMOORTHI: First of all, on page 2 of your statement, you talked about the meeting that you helped facilitate between Senators (Ron) Johnson (WI) and (Chris) Murphy (CT) with President Zelensky. Do you recall that meeting?

AMBASSADOR TAYLOR: I do.

AMBASSADOR TAYL0R: The Senators were concerned the Senators could see that President Zelensky faced a dilemma,and the dilemma was investigate Burisma and 2016 or don’t.And if they investigated, then that would be seen to be interfering on the side of President Trump’s reelection; they didn’t investigate, that would be seen to be interfering’in favor of some of his of President Trump’s opponent. So they told him: Just don’ t get involved, just don’ t get involved.

MR. MALINOWSKI: And both Senator Murphy and Senator Johnson said or expressed that sentiment, correct?

AMBASSADOR TAYLOR: I want to be careful about quoting Members of Congress and Senators. This is why I was counseled by smarter people than I about how to phrase this. But that was spoken by Senator Murphy.

MR. MALINOWSKI: 0kay. And, now, some folks might say that the beginning of those investigations was merely investigating corruption. Why was it your and their sentiment that it was actually getting Zelensky drawn into U. S. politics?

AMBASSADOR TAYLOR: it would get into U.S. politics if the Ukrainians were to go was to investigate the Burisma cases that were closed at the time when Vice President Biden was in town in Kyiv frequently making the point about anticorruption and when his son was on the board of Burisma. So it was that cluster of issues surrounding Burisma that would be highlighted by an investigation.

MR. KRISHNAMOORTHI: And you agreed with the sentiment expressed by the Senators, correct?

AMBASSADOR TAYLOR: I did

“First, if Ukraine succeeds in breaking free of Russian influence, it is possible for Europe to be whole, free, democratic, and at peace. In contrast, if Russia dominates Ukraine, Russia again will again become an empire”

THE CHAIRMAN: Now, my colleague in the minority asked you about “quid pro quo.” And are you a lawyer?

AMBASSADOR TAYLOR: I am not. I am not, Mr. Chairman.

AMBASSADOR TAYLOR: I am definitely not in the position.

THE CHAIRMAN: And, of course, whether it meets a legal definition of “quid pro quo” or it doesn’t is really irrelevant to what we’re focused on here. But it is your testimony that, hey, you don’t make these public statements about these two political investigations we want, you’ re not getting this meeting you make these statements, you’ll get the meeting; you don’t make these statements, you won’t. Was that your understanding of the state of affairs in July of 2019?

WASHINGTON — The Republican defense of President Donald Trump is all over the place — a situation that is both less than ideal, but perhaps good enough for the White House.

The only two points GOP lawmakers agree on right now are that they aren’t ready to remove Trump from office and they think Democrats don’t play fair.

Otherwise, they’ve been unable to formulate a clear, cohesive message in support of a commander in chief facing serious consequences over the wide-ranging campaign he ran to pressure Ukraine into investigating 2020 rival Joe Biden.

Instead, and often in lieu of delving into the facts of the case, they’ve lined up behind one of a series of arguments for Trump staying in place that include:

(32937)
$348.00 (as of May 18, 2022 02:51 GMT -04:00 - More infoProduct prices and availability are accurate as of the date/time indicated and are subject to change. Any price and availability information displayed on [relevant Amazon Site(s), as applicable] at the time of purchase will apply to the purchase of this product.)