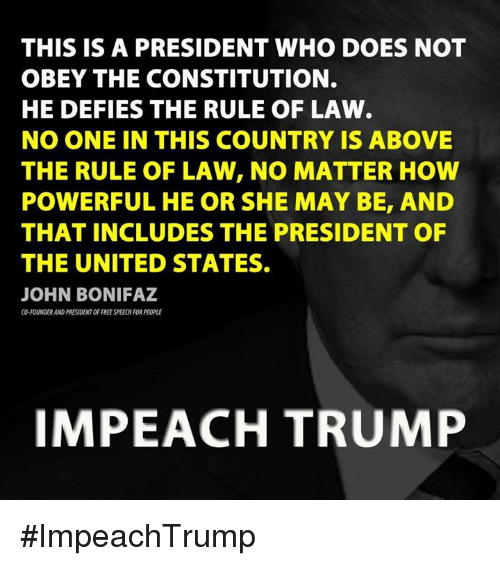 Fortunately we have an index for the cost of Trump’s crime because Trump did try to shake Ukraine down for $250+ million of US military aid (taxpayer dollars) in order to obtain foreign interference in the 2020 election.

George Conway demonstrates that Trumpian pathology renders him incapable of operating in a mode that cannot breach trust. It may be the case that Conway overdetermines the psychological explanations, because the same methodology might also be used to keep Trump out of prison. What could pass for an insanity defense.

And so it turns out that impeachment is a more practical mechanism for addressing the fact that Trump’s narcissism and sociopathy render him unable to comply with the obligations of his office. It’s also an appropriate mechanism, because the constitutional magic words (other than Treason and Bribery) that form the basis of an impeachment charge—high Crimes and Misdemeanors, found in Article II, Section 4 of the Constitution—mean something other than, and more than, offenses in the criminal-statute books. High Crimes and Misdemeanors is a legal term of art, one that historically referred to breaches of duties—fiduciary duties—by public officeholders. In other words, the question of what constitutes an impeachable offense for a president coincides precisely with whether the president can execute his office in the faithful manner that the Constitution requires.

The phrase high Crimes and Misdemeanors was dropped into the draft Constitution on September 8, 1787, during the waning days of the Constitutional Convention. The discussion before the Convention’s Committee of Eleven was extremely brief. The extant version of what became Article II, Section 4 provided for impeachment merely for treason and bribery. George Mason objected, and proposed adding “maladministration.” Elbridge Gerry seconded Mason’s proposal, but James Madison objected that it was too vague. Gouverneur Morris chimed in, arguing that having a presidential election “every four years will prevent maladministration.” Mason moved to add, according to Madison’s notes, “other high crimes & misdemeanors (against the State).” The motion passed, eight to three. And so, as a result of that brief exchange, Article II of the Constitution of the United States provides that “the President, Vice President and all civil Officers of the United States, shall be removed from Office on Impeachment for, and Conviction of, Treason, Bribery, or other high Crimes and Misdemeanors.”

As Yoni Appelbaum has observed in this magazine, “constitutional lawyers have been arguing about what counts as a ‘high crime’ or ‘misdemeanor’ ever since.” One of the most compelling arguments about the meaning of those words is that the Framers, in Article II’s command that a president faithfully execute his office, imposed upon him fiduciary obligations. As the constitutional historian Robert Natelson explained in the Federalist Society Review, the “founding generation [understood] ‘high … Misdemeanors’ to mean ‘breach of fiduciary duty.’” Eighteenth-century lawyers instead used terms such as breach of trust—which describes the same thing. “Parliamentary articles of impeachment explicitly and repetitively described the accused conduct as a breach of trust,” Natelson argues, and 18th-century British legal commentators explained how impeachment for “high Crimes and Misdemeanors” was warranted for all sorts of noncriminal violations that were, in essence, fiduciary breaches.

Just as the Framers viewed the presidency as fiduciary, they understood the offenses that might disqualify the incumbent as breaches of that fiduciary duty. And that may well be why the discussion of Morris’s suggestion was so brief—the drafters knew what the words historically meant, because, as a House Judiciary Committee report noted in 1974, “at the time of the Constitutional Convention the phrase ‘high Crimes and Misdemeanors’ had been in use for over 400 years in impeachment proceedings in Parliament.” Certainly Alexander Hamilton knew by the time he penned “Federalist No. 65,” in which he explained that impeachment was for “those offenses which proceed from the misconduct of public men, or, in other words, from the abuse or violation of some public trust.”

So the congressional judgment in the impeachment process necessarily includes the number and seriousness of offenses, and even extends well beyond those calculations. Congress must also, in particular, weigh the chances of recidivism; that possibility is precisely why the Constitution provides for removal as the principal sanction upon conviction on impeachment charges. As Charles Black Jr. explained in his classic 1974 book on impeachment, “We remove him principally because we fear he will do it again.” Or as George Mason put it during the Constitutional Convention, “Shall the man who has practised corruption … be suffered to escape punishment, by repeating his guilt?”

In short, now that the House of Representatives has embarked on an impeachment inquiry, one of the most important judgments it must make is whether any identified breaches of duty are likely to be repeated. And if a Senate trial comes to pass, that issue would become central as well to the decision to remove the president from office. That’s when Trump’s behavioral and psychological characteristics should—must—come into play. From the evidence, it appears that he simply can’t stop himself from putting his own interests above the nation’s. Any serious impeachment proceedings should consider not only the evidence and the substance of all impeachable offenses, but also the psychological factors that may be relevant to the motivations underlying those offenses. Congress should make extensive use of experts—psychologists and psychiatrists. Is Trump so narcissistic that he can’t help but use his office for his own personal ends? Is he so sociopathic that he can’t be trusted to follow, let alone faithfully execute, the law?

At some base level, Trump realizes the only way out of this is to convince his supporters and the GOP that literally *whatever* he does is fine.

At some base level, Trump realizes the only way out of this is to convince his supporters and the GOP that literally *whatever* he does is fine.

“During a phone call with Xi on June 18, Trump raised Biden's political prospects as well as those of Warren, who by then had started rising in the polls… Trump also told Xi he would remain quiet on Hong Kong protests as trade talks progressed.” https://t.co/1gqaHKaFMT

Rick Perry is expected to resign next month as secretary of the Department of Energy. https://t.co/8pgrkSaX5d

Energy Secretary Rick Perry, who has met on at least three occasions with Ukrainian President Volodymyr Zelensky, has pledged to cooperate with House Democrats in their impeachment probe. "We are going to work with Congress and answer all their questions." https://t.co/l7WIPFg63W

(22298)
$179.00 (as of May 19, 2022 00:08 GMT -04:00 - More infoProduct prices and availability are accurate as of the date/time indicated and are subject to change. Any price and availability information displayed on [relevant Amazon Site(s), as applicable] at the time of purchase will apply to the purchase of this product.)