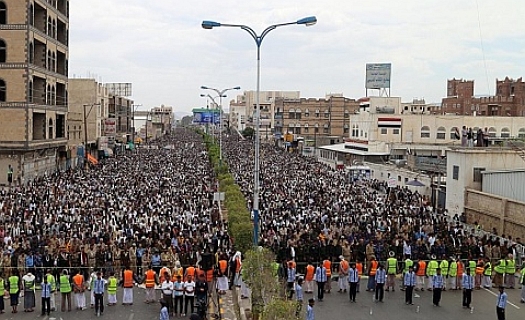 Saudis flying American jet fighters are attacking targets at Sana'a, the capital of Yemen. They also hit other sites across the western half of the country. At least 27 civilians have been killed, probably more.

None of the targets connect with al-Qaeda or other terror groups. Instead, these attacks hit al-Qaeda's principal enemy in Yemen.

What is happening here ??? We're supposed to be fighting al-Qaeda, right?
–

The people of Sana'a had turned out in protests that started last fall. They demanded giving the war against al-Qaeda over to the Houthis. That crowd in the picture is pretty much the whole middle-years population of Sana'a.

When you look at Yemen based on tribes, the line cuts down the middle:
–

–
al-Qaeda started out in the triangular area adjacent to Saudi. Control has shifted back and forth over the years with three Salafi terror operations in the mix:

— al-Qaeda in the Arabian Peninsula (AQAP)

Let's start with the obvious: a Sunni government of Yemen headed by Major General Abd Rabbuh Manṣur Hadī abdicated back in February, 2015. The Hadi government had not responded adequately when al-Qaeda carried out multiple bombings aimed at Yemeni civilians. The Hadi government was basically a dictatorship. It's failures had disastrous consequences.

Sana'a is where the two big red dots are on the map. To repeat: that is Yemen's capital city.

But then moving forward from February into March the G.C.C. actions changed radically. The Saudis initiated repeated bloody aerial attacks aimed at avoiding a Shia takeover of the western, predominantly Shia part of Yemen.

Obsession with Sunni control of Shia areas of Yemen has taken over:

“I say to the stooges of Iran, its toys and those who support it, you have destroyed Yemen with your political adolescence and by manufacturing domestic and regional crises.”

That is exactly what the February agreement set up. Took G.C.C. about a month to wake up to what they had put on paper.

Generating military action against the actual terrorists ??? That is not on G.C.C.'s agenda. Over the last 15 years the G.C.C. countries have produced exactly zero attacks on their Salafi proxies — excepting when America insisted on attacking ISIS starting 2014.

Anti-terrorism is a joke over there.

And in Israel and the United States, the NeoCon horde have set about propagandizing the situation in Yemen. They claim to be anti-terrorism. That's what they say on the “news” programs. But suddenly they're not bad mouthing al-Qaeda and ISIS for killing Yemeni civilians. They're out there by the dozens attacking al-Qaeda's enemies, the Houthis.

Anti-terrorism is a joke over here.

The NeoCons are doing their damnedest to present the Houthi anti-al-Qaeda forces as villains.

“Instability” is the watch word.

Terrorism inside Yemen recalls the hundreds of bombings that occur in Iraq every year since 2003. The prior government, the Sunnis led by General Hadi, had failed. Yet what we see from the NeoCons and their marks in government is a claim that the Houthis are causing terrorism by generating “instability.”

Under the February U.N./G.C.C. agreement the Houthi are allowed to take over the government at Sana'a plus undertaking operations to suppress terrorism. Kinda hard to do all that when you're getting hit by Made In America munitions.

The Houthi's willingness to destroy al-Qaeda, after all, is their signal characteristic when viewed from outside the country.

Refer to the map. AQAP & Friends only thrived in the Sunni half of the country. Otherwise it's a few pockets of fighters here and there, at most, basically isolated cells.

Working out of Sunni Yemen the AQAP group has generated a handful of anti-Western actions. Arguably the best known of these was the “Underwear Bomber” attack. Umar Farouk Abdulmutallab failed at blowing up an airliner headed to Detroit in 2009  With far more effect these Salafi terrorists have attacked Yemeni civilians again and again, predominantly Shia/Shi'ia/Shiite. It looks like Iraq. The total deaths run to more than a thousand killed.

Killing children goes down fine with these SOBs/psychopaths. It's exactly like ISIS in Syria and Iraq. As recently as March 20th the Salafis mounted bomb attacks killing 126 at two mosques in Sana’a and Saada.

North Yemen and South Yemen. That's how the world draws some of the maps of Yemen. Thing is, that is not how you read the tribal map. And with Arabs, you want to start everything in local politics with references to their tribes.

You would expect to see it “West Yemen” and “East Yemen.” That is the tribal structure as you can see on the map above.

Then, in this tribal context and as we get into 2015, what the Houthis have done is to seize “West Yemen.” The Shi'ia area. This western area has withstood efforts by the Salafis to take over additional Yemeni territory. Now they need to clean out the pockets of terrorists that remain.

The Houthis have no cooperative involvement with terrorists. They're enemies to the point where Houti civil units have gone out in hot pursuit of terrorist vehicles.

Both countries are under attack from multiple Salafi terrorist operations. Both countries have Shia/Shi'ia/Shiite tribal/political/ethnic groups that are willing to fight al-Qaeda & Friends on the ground. Both countries come into 2015 with the al-Qaeda/Salafi groups taking losses as the local Shia groups figure out how to beat them.

In Syria it looks like America is waking up, finally, to seeing the Shia-led Baathist coalition as allies, not enemies. That is not what the NeoCons have peddled. Not for 20 years and more. The NeoCons have worked to overthrow the Syrian government even when the Syrians took “rendition” prisoners from the Bush Administration and tortured them, on order.

Israelis flying American jet fighters and helicopters are attacking anti-Salafi targets in western Syria and eastern Lebanon. One excuse given was the Weapons of Mass Destruction line. Same old, same old like Iraq in 2002/2003. They've flown at least 50 aerial sorties. nothing against ISIS or Nusrah or MB.

Syria's Baathists can be barbaric. No question. But compared to ISIS, Nusrah Front/AQS, Muslim Brotherhood/Free Syrian Army — the Baathists govern with secular fairness. They are surely the lesser of the two evils. (Syrian crime rates stayed low. And incomes went up per capita from $1,800 to $5,200 over 20 years. Boys and girls went to school. The Baathists got something right.)

In Yemen, the Houthis are poorly educated. Primitive. Very pro-Sharia. Thing is, they take offense to people killing their friends and family members. Let the Houthis use modern weapons, stop bombing them, and they will do what it takes to wipe out the Salafi terrorists.

They also stomp Saudi Army units one-on-one, more than not. Historically… what? they remind us of Confederate cavalry early in our Civil War. Apparently they're born understanding Movement Warfare. And they aim prior to pulling triggers. Similar to Kurds.

War is Hell. You betcha.

Couple things there need to change. The sooner the better.