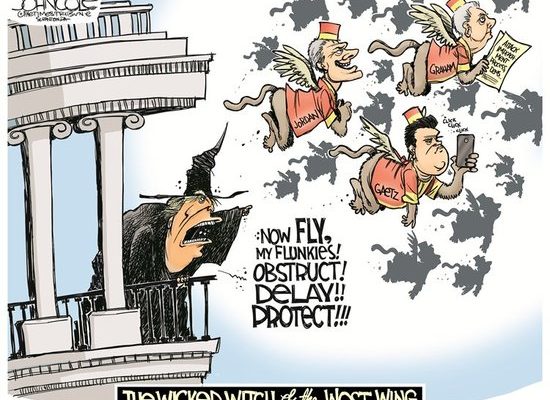 Some civil disobedience acts are better than others, like storming a SCIF, because to Gaetz, some kayfabe stunts are more legal than others during an impeachment inquiry. On the bright side, at least Gaetz didn’t melt or burst into flames.

Gaetz wants women who threw drink at him to serve time https://t.co/kzqhYrioRB

Kondrat'yev, 35, in August pleaded guilty to assaulting a U.S. Congress member. She faces up to a year in prison, a $100,000 fine or five years of probation.

She admitted to throwing a cup of red liquid at Gaetz while he was leaving a Pensacola restaurant following his “Open Gaetz” event on June 1.

Kondrat’yev was part of a group of protesters outside the event, and she reportedly held a sign that read “Gaetz wipe the blood off your hands, A+ rating NRA, save our kids vote Gaetz out 2020,” referring to the congressman's rating by the National Rifle Association, Roll Call reported at the time.

If Kondrat’yev had used glitter, would there be a need to rewrite the narrative.

There’s a concept in pop culture called “retconning,” short for retroactive continuity. The idea is that people working on continuations of existing stories — such as the people making a new “Star Wars” film, for example — might want to go in a new direction that breaks from the established narrative. To solve the dilemma, they might, say, include a scene showing an established character from a past film suddenly revealing a new family member. Change what’s known and head in a new direction.

On Tuesday evening, with public impeachment hearings looming, President Trump’s personal attorney Rudolph W. Giuliani attempted to retcon the Ukraine story. In an essay published by the Wall Street Journal, Giuliani attempted to fit an exculpatory narrative into what’s known about how Trump tried to pressure Ukraine into announcing new investigations that would benefit him politically.

“In particular, Messrs. Zelensky and Trump discussed Ukrainian interference in the 2016 U.S. presidential election,” Giuliani writes. “A Ukrainian court ruled in December last year that the National Anti-Corruption Bureau and Ukrainian lawmaker Serhiy Leshchenko illegally interfered in the 2016 election by releasing documents related to Paul Manafort.” Giuliani goes on to riff on a 2017 Politico article that has become to the Ukraine scandal what Carter Page was to the Russia probe.

Ã¢Â€ÂœOut of the hundreds of people Jeffrey Dahmer met in his life, he only killed and ate 17Ã¢Â€Â https://t.co/NIz65vRNo0

Trumpism has become the vehicle for logical fallacy.

But seriously, there’s just enough steak but not enough sizzle for a meatless Friday that will feature another witness to the crimes of Amigos and Shreks.

Analysis: Nuremberg Trials lay out disturbing details, but lack pizzazz necessary to capture public attention. Unlike the Blitz, which, like, totally persuaded people to get out of bed and pay attention to the nightly news.
— @jonallendc, Nov 20th, 1945, probably.

My final tweet on this tweet. Framing like this makes me realize we learn nothing. Time is a flat circle. The rest of us are in Dante's Inferno or simply Cassandra tweeting in the void. Also, the rest of us just have to work harder & be better for 2020. https://t.co/eRb4DSbdN3

I donÃ¢Â€Â™t understand the analysis stories calling todayÃ¢Â€Â™s hearing boring. Most of the information was already known from the closed-door hearings. Hearings are virtually never Ã¢Â€ÂœfunÃ¢Â€Â or Ã¢Â€Âœexciting.Ã¢Â€Â And itÃ¢Â€Â™s a pretty unsophisticated take from anyone who does Washington for a living.

GOP wants moar cowbell in the impeachment inquiry, thus the demand for more witnesses like the whistleblower

Glad to see the White House believes the country deserves to hear from witnesses whoÃ¢Â€Â™ve spoken with Trump. So I assume the White House will reverse itself and encourage Giuliani and Bolton and Mulvaney to testify. https://t.co/qdYb4XGD3f

What happened in the five months since Zelensky got elected, Ukraine aid was delayed, Trump and Rudy involvement and when the hold was eventually released after the controversy got Hill attention. The key dates: https://t.co/RtipsW5NZ0

This is mob speak. “Insurance” means that he has dirt on Trump.

This is how EVERYTHING works in their world. Get leverage over others to ensure loyalty.

This works great….until they are all cornered and start setting fire to each other.