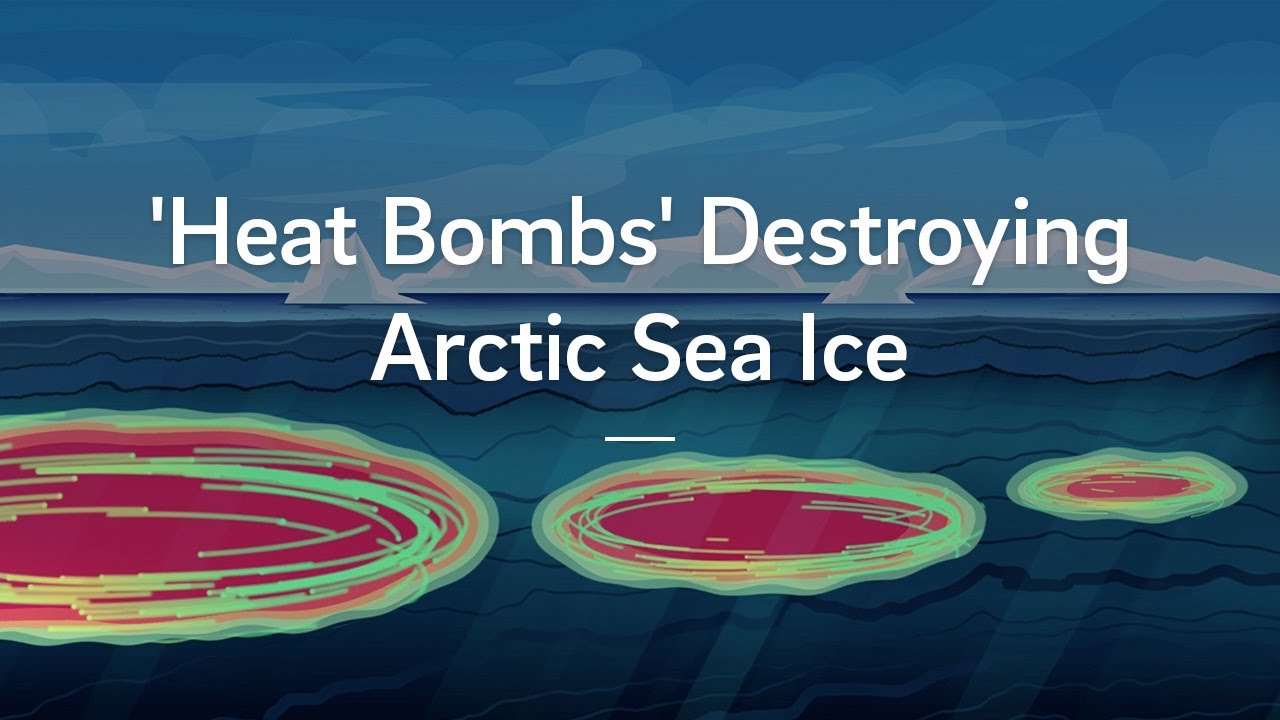 According to new findings from the University of California San Diego and Scripps Institution of Oceanography, primarily in summer, unprecedented quantities of heat from the Pacific are pouring into the Arctic Ocean through the Bering Strait. This likely explains the rapid decimation of sea ice in the region. The decline has serious implications for our climate. The sea ice helps keep the Arctic cool and reflects the energy from sunlight back to space.

The Arctic is one of two of the planet’s air conditioners. We do not want to lose either one.

From the introduction of the study published in Nature Communications.

Unlike most of the world’s oceans, density in the upper Arctic Ocean is primarily controlled by salinity9,10. The Beaufort Gyre (BG) is home to the freshest surface waters, resulting from a combination of river inflow, precipitation, and sea ice melt which are consolidated in the center of the gyre through the convergence of wind-drive flows11. Strong salinity stratification allows heat to be sequestered sub-surface, in water masses that are warmer but saltier than cool, fresh, surface water.

In the Western Arctic, the largest reservoir of heat in the upper ocean (above ~200 m depth) is Pacific Summer Water (PSW)12,13. PSW originates as Pacific ocean water entering through Bering Strait, and is considerably warmed while transiting across the shallow Chukchi shelf during summer months14. An appreciable amount of the summer warmed water subducts, allowing heat to spread into the basin interior, where it is sequestered from direct interaction with the atmosphere. Once subsurface, PSW is found throughout the Beaufort Gyre15. Here we define PSW to be water with potential density between 23.2 and 25.2 kg m−3, warmer than 0 °C, roughly consistent with other recent characterizations8,13,16. Within the central BG, PSW is typically found 30–100 m below the surface, frequently in the form of patchy eddies and filaments13,17,18.

The growing heat content of the PSW sub-surface layer has a first-order effect on accelerating sea ice melt rates in this region, in several ways6,15,19. In the short term, the fate of subducted heat may impact the timing of sea ice growth in late autumn, if it remains close enough to the surface to be rapidly mixed upwards by strong fall storms20. Longer-term and basin-wide, the observed rate of Arctic sea ice decline thermodynamically requires only a 1 W m−2 imbalance in heat exchange between ocean and atmosphere7. Annually averaged, heat flux rates through Barrow Canyon were 3 TW in 201021, a value that has likely grown in the last decade8. If all the heat entering through Barrow Canyon subducted and spread out evenly sub-surface within the BG, that would lead to a warming rate for that layer of 3 W m−215. Observations show that the heat content of the sub-surface PSW within the BG has nearly doubled over the last 30 years15. If all this heat were turbulently mixed upwards, it could melt more than a meter of sea ice15.

Pacific origin water that enters the Arctic through Bering Strait brings not only heat, but supplies nutrient-rich water to the Chukchi and East Siberian shelves22,23. High productivity combined with enhanced rates of sedimentary denitrification across the shelf24,25 results in primary productivity in the western Arctic Ocean being typically nitrate limited26. The physical processes that control the subduction, stirring and mixing rates of Pacific origin water hence also regulate the supply of nutrients that sustain primary production in the BG. An improved understanding of the PSW subduction process is critical for understanding ecosystem functioning and evolution, especially under changing Arctic conditions.

The Arctic is an unusual ocean in that it is stratified – or layered – by salinity instead of temperature. Most oceans of the world have warmer, lighter water near the surface and colder, denser water below. In the Arctic, however, there is a surface layer that is cold but very fresh, influenced by river outflow and accelerating ice melt.  Warm, relatively salty water enters from the Pacific Ocean through the Bering Strait and then the Barrow Canyon off Alaska’s northern coast, which acts as a nozzle as the water flows through the narrow passage.

These pockets known as “heat bombs” are just stable enough to be able to last for months or years, swirling far north beneath the main ice pack near the north pole, and destabilizing that ice as the heat in them gradually but steadily diffuses upwards to melt the ice. Until now, though, the process by which the warm water subducts has neither been observed nor understood. Without that understanding, climate scientists have been unable to include this important effect in forecast models, some of which under-predict accelerating sea ice melt rates.   Given that the influx of warm Pacific origin water has been growing over the past decade or so, this work adds to a growing body of evidence that Arctic sea ice, a source of global climate stability, could disappear for large portions of the year.

I’ve been a tad prolific over the past few days. There seems to be a lot of new studies and research being released. They are important, and I share them with this community.

Perhaps research has returned since the beginning of the pandemic put a hold on climate science. Just a hunch on my part.