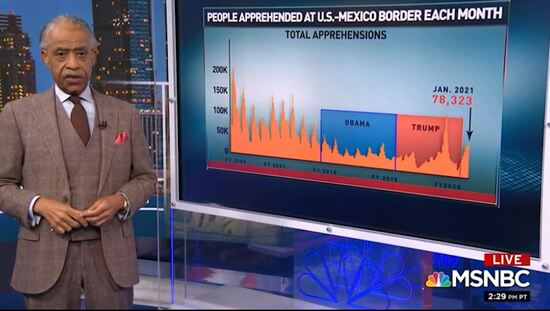 Al Sharpton did a piece on immigration that dispels the manner the Fox News-like manner mainstream media is covering “border crisis.”

Al Sharpton knocks it out of the park

Al Sharpton did not mince his words in the piece above. Most importantly, he revealed an important chart that should dispel the narrative that Fox News started and that the mainstream media was too happy to follow.

The chart is clear. The surge has yet to reach the peak that occurred under Donald Trump. Yet the media is covering it as if it is unprecedented.

There is an important piece by Adam Serwer in The Atlantic titled “The Real Border Crisis,” everyone should read. Among many important realities about immigration at the border, he points out how the former president and Conservative media have pretty much conned the mainstream media into a false narrative.

Conservative media have eagerly seized on the situation at the border, describing it in the same apocalyptic terms that they employed during the Trump administration. The Fox News host Tucker Carlson accused the Biden administration of attempting to “import as many new citizens as we can in the United States to replace all the disobedient ones who didn’t vote for us,” a PG-13 paraphrase of the racist “white genocide” conspiracy theory. Others on the network sought to blame the small number of migrants being allowed into the country for the rise in COVID-19 infections in states lifting restrictions. Republican gains with Latino voters in Florida and along the Rio Grande Valley in the 2020 elections have yet to dampen the enthusiasm for genetic determinism in right-wing media.

But it would be a mistake to assume that conservative media by itself is driving the conversation. The “border crisis” narrative follows an old and cherished formula that existed long before Trump came on the scene. Media bias is rarely as simple as mere partisanship or ideology—the strongest bias in media is toward there being a story at all. And in the case of immigration, the “border crisis” is the story the media like to tell over, and over, and over, to massive, if unintended, political effect. …

Although there were many dedicated immigration reporters at the Times and other outlets who did fantastic work uncovering Trump-era abuses, many others accepted the president’s framing. In the lead-up to the 2018 midterm elections for example, Trump successfully baited the political press into saturation-level coverage of a supposed crisis posed by a migrant caravan, which abated as soon as the midterms were over. Whatever the intentions of individual reporters or outlets, in the aggregate, Americans are and have been regularly faced with coverage that reinforces false Trumpian rhetoric of an imminent “invasion.”

Sadly, we continue to repeat history. Is it lazy journalism? Not really. It is just everyone jumping on a narrative that gets eyeballs because of the prejudices of too many. Al Sharpton put much into perspective.