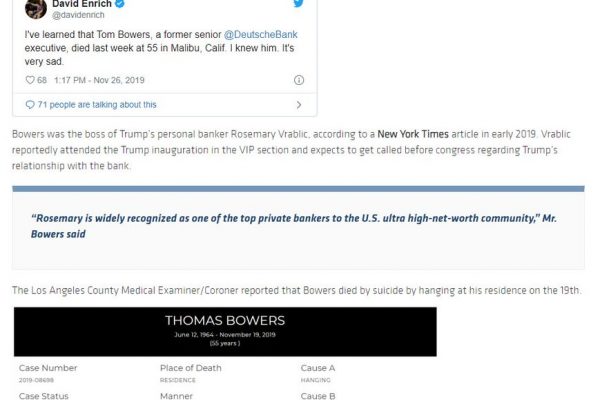 In case you missed the breaking news from late last night: A former Deutsche Bank executive who signed off on Trump loans hanged himself in Malibu last week: https://t.co/TrTWWlWLa4

Our servers are having a hard time. Here's a backup.

1/ Thomas Bowers, a former Deutsche Bank who was the head of the American wealth-management division, killed himself in Malibu, California on Tuesday, November 19th according to the coronor’s initial report.

2/ First reports of his death were reported by the New York Times David Enrich.

I've learned that Tom Bowers, a former senior @DeutscheBank executive, died last week at 55 in Malibu, Calif. I knew him. It's very sad.

3/ Bowers was the boss of Trump’s personal banker Rosemary Vrablic, according to a New York Times article in early 2019. Vrablic reportedly attended the Trump inauguration in the VIP section and expects to get called before congress regarding Trump’s relationship with the bank.

4/ The Los Angeles County Medical Examiner/Coroner reported that Bowers died by suicide by hanging at his residence on the 19th.
5/ One source who has direct knowledge of the FBI’s investigation into Deutsche Bank said that federal investigators haved asked about Bowers and what documents he might have.
6/end/ Another source who has knowledge of Deutsche Bank’s internal structure said that Bowers would have been the gatekeeper for financial documents for the bank’s wealthiest customers.
Forensic News has ordered the full coroner report.

“Bowers was the boss of Trump’s personal banker Rosemary Vrablic, according to a New York Times article in early 2019. Vrablic reportedly attended the Trump inauguration in the VIP section and expects to get called before congress regarding Trump’s relationship with the bank. ”

Rosemary Vrablic has been Trump's personal banker.[6] Trump began working with Deutsche Bank in 1998, securing a loan for renovations at 40 Wall Street and a $300 million loan for Trump World Tower.[7] Trump borrowed $640 million from the bank for Trump International Hotel and Tower in Chicago, offering a $40 million personal guarantee.[7] After the 2008 financial crisis Trump was unable to make loan payments, so he sued the lender for $3 billion in damages, alleging “Deutsche Bank is one of the banks primarily responsible for the economic dysfunction we are currently facing”.[7] Deutsche Bank responded by suing Trump to collect on the loan.[7]

Vrablic's wealth management unit at Deutsche Bank then loaned Trump the money he needed to pay the bank's real estate division.[7] She then gave him another loan on the Chicago project.[7]

Vrablic was relatively unknown on Wall Street outside of the private banking sector until Trump mentioned her in early 2016,[8] when he inaccurately described her as “the head of Deutsche Bank” and “the boss”.[9][10] Vrablic sat in the VIP section at Trump's swearing-in ceremony.[11] After Trump's election, Deutsche Bank attempted to restructure about $300 million in loan debt originated primarily by Vrablic, in an attempt to avoid potential conflicts of interest.[12]

In addition to Trump, Vrablic's other clients include Stephen M. Ross and Jared Kushner.[7][5] In 2017 Kushner and his mother had a personal unsecured line of credit from the bank for $5 to $25 million.[7] In 2016, the bank loaned Kushner Companies $285 million to buy several floors of The Times Square Building from Africa Israel Investments.[7] Kushner also issued a mortgage-backed security for the Puck Building through Deutsche Bank.[7]

In 2013, Vrablic was managing assets valued at $5.5 billion on behalf of about 50 clients, 40% of whom had made their money in real estate.[2] Her clients include Herbert Simon, the billionaire owner of the Indiana Pacers.[2]

The relationship had paid off. Mr. Trump used loans from Deutsche Bank to finance skyscrapers and other high-end properties, and repeatedly cited his relationship with the bank to deflect political attacks on his business acumen. Deutsche Bank used Mr. Trump’s projects to build its investment-banking business, reaped fees from the assets he put in its custody and leveraged his celebrity to lure clients.

Then Mr. Trump won the 2016 election, and the German bank shifted into damage-control mode, bracing for an onslaught of public scrutiny, according to several people involved in the internal response.

In the weeks before Ms. Vrablic attended his swearing-in, the bank commissioned reports to figure out how it had gotten in so deep with Mr. Trump. It issued an unusual edict to its Wall Street employees: Do not publicly utter the word “Trump.”

More than two years later, Mr. Trump’s financial ties with Deutsche Bank are the subject of investigations by two congressional committees and the New York attorney general. Investigators hope to use Deutsche Bank as a window into Mr. Trump’s personal and business finances.