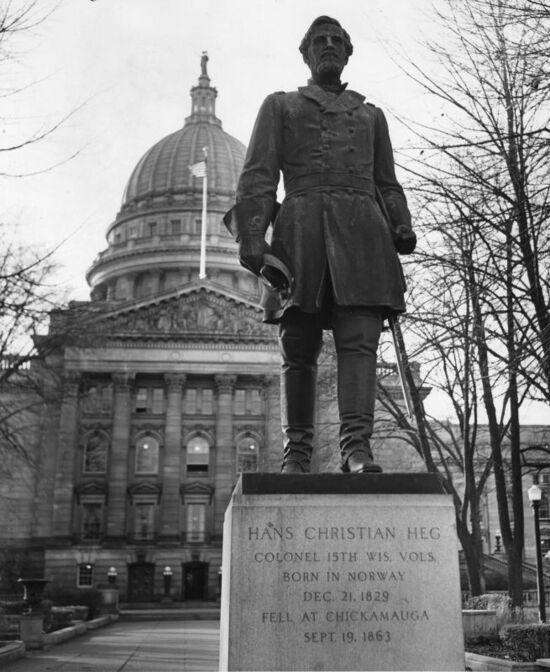 There was unrest in Madison Wisconsin and while we’ve gotten used to the idiocy often associated with the activity, pulling down statues seems like the kind of testosterone-fueled adventurism that won’t really advance causes. This seems especially ignorant when anti-racist monuments get torn down since there are still fewer of them.

MADISON – Fury exploded outside the Wisconsin State Capitol on Tuesday night as protesters smashed windows at the statehouse, attacked a state senator, and tore down two iconic statues — including one of an abolitionist who died trying to end slavery during the Civil War.

The unrest began earlier Tuesday following the arrest of a Black man who was arrested after bringing a megaphone and a baseball bat into a Capitol square restaurant. It followed weeks of mostly peaceful protests of the death of George Floyd, a Black man who was killed by a white police officer.
It prompted Gov. Tony Evers on Wednesday to put the Wisconsin National Guard on notice to protect state buildings, including the Capitol.
During the melee late Tuesday, Democratic state Sen. Tim Carpenter was assaulted after filming the protesters.
“I don't know what happened … all I did was stop and take a picture … and the next thing I'm getting five-six punches, getting kicked in the head,” Carpenter told a Milwaukee Journal Sentinel reporter following the assault.

Similarly, when reasoned petitioning ends, often mob action begins, even if it takes a century, or even one year.

When members of the Grand Army of the Republic (GAR), a fraternal organization of Union veterans, became aware of plans for a public memorial to be erected in Washington, D.C. in honor of a Confederate general, they contacted congressmen and told them it would be a disgrace to the memories of all Union soldiers.[3][6] Nevertheless, on April 9, 1898, members of Congress approved the memorial after Masons assured them it would depict Pike as a civilian, not a soldier.[3][7]

Following the 2017 Unite the Right rally, there was renewed interest in many cities and states to remove Confederate statues and memorials from public land. The day after the rally, protesters gathered at the Pike memorial and chanted “tear it down”, and during another protest, it was vandalized when someone threw red paint on it.[25][26] Local government officials, including some members of the Council, Attorney General for the District of Columbia Karl Racine, and Delegate Eleanor Holmes Norton, asked the NPS to remove the memorial.[26][27] In July 2019 Norton introduced House bill H.R. 4135 directing that the statue be removed.[28]

On June 19, 2020, after weeks of protests in response to the killing of George Floyd, protesters using rope and chains toppled the Pike statue, doused it with a flammable liquid and ignited it. After several minutes, local police intervened, extinguished the flames, and left the scene.[29] The following day the NPS removed the statue.[30] Although Norton had been a strong proponent of removing the statue, after its toppling she clarified: “I would like these statutes to be placed in museums and the history of the statute told so that we don't lose this moment in history. We don't want to obliterate our history. The way to keep that history alive so we can never repeat this kind of history again.”[30] In response to the statue being toppled, President Donald Trump tweeted: “The D.C. police are not doing their job as they watch a statue be ripped down & burn. These people should be immediately arrested. A disgrace to our Country!” Because the memorial was in a federal park, it was under jurisdiction of the NPS and United States Park Police, not the local police.[29]

(43213)
$0.00 (as of May 20, 2022 11:14 GMT -04:00 - More infoProduct prices and availability are accurate as of the date/time indicated and are subject to change. Any price and availability information displayed on [relevant Amazon Site(s), as applicable] at the time of purchase will apply to the purchase of this product.)