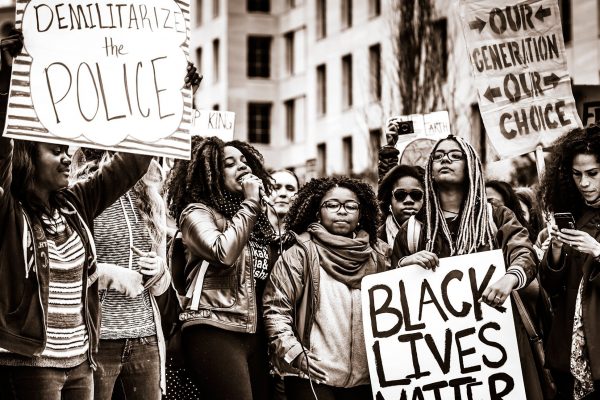 Donald Trump once said he’d get 95 percent of the black vote when he ran for reelection.

While personally optimistic about their own lives, black Americans today offer a bleaker view about their community as a whole. They also express determination to try to limit Trump to a single term in office.

More than 8 in 10 black Americans say they believe Trump is a racist and that he has made racism a bigger problem in the country. Nine in 10 disapprove of his job performance overall.
The pessimism goes well beyond assessments of the president. A 65 percent majority of African Americans say it is a “bad time” to be a black person in America. That view is widely shared by clear majorities of black adults across income, generational and political lines. By contrast, 77 percent of black Americans say it is a “good time” to be a white person, with a wide majority saying white people don’t understand the discrimination faced by black Americans.

Okay, I totally hear that. But for the record, I’m a white person, and I’m having anything but a good time with this racist circus peanut in office.

Other conclusions from the poll:

Notably, black people have a much more realistic view of Trump’s impact on the economy and, specifically, the black unemployment rate:

A 77 percent majority of black Americans say Trump deserves “only some” or “hardly any” credit for the 5.5 percent unemployment rate among black adults compared with 20 percent who say Trump deserves significant credit.
In follow-up interviews, many said former president Barack Obama deserves more credit for the improvement in the unemployment rate, which declined from a high of 16.8 percent in 2010 to 7.5 percent when he left office.

Interesting that black people get this right while so many white people I know have an entirely blinkered perspective.

Yes, Barack Obama did do far more for the economy, while Trump is doing everything he can to ruin it.

Shocking! A white person taking credit for a black person’s accomplishments. And here I thought I’d seen everything.

(22501)
$179.00 (as of May 22, 2022 01:03 GMT -04:00 - More infoProduct prices and availability are accurate as of the date/time indicated and are subject to change. Any price and availability information displayed on [relevant Amazon Site(s), as applicable] at the time of purchase will apply to the purchase of this product.)