We wanted to show y'all how @LindseyGrahamSC keeps increasing the number of acceptable COVID-19 deaths (hint: it's zero).

We literally could not finish the video before he changed the target again. He's now up to 180,000 deaths. pic.twitter.com/avO1d03grsÃ¢Â€Â” Jaime Harrison (@harrisonjaime) July 2, 2020

Jaime Harrison, the South Carolina Democrat vying to unseat Sen. Lindsey Graham this fall, on Thursday released a somber ad laying out a compact timeline of Graham's defense of the White House's botched response to the coronavirus pandemic. The Republican senator has consistently raised the number of deaths he would find acceptable as he defends his frequent golf partner, President Donald Trump.

Salon obtained an exclusive preview of the 35-second spot, which is titled “Goalposts” and will run on digital platforms starting Thursday. The ad syncs Graham's increasingly high thresholds for measuring the president's success with a rolling COVID-19 death toll counter, highlighting the three-term incumbent's efforts to stay ahead of a grim reality that has consistently surged past his projections — including at home.

“South Carolina is hitting a new daily case record almost every single day, and we are home to one of the highest growth rates in the country,” Harrison told Salon. “But Lindsey's television interviews are not about protecting South Carolinians or making sure small businesses and families can get by during this time of economic upheaval. Instead, he is using his position to play political games and push for the cutting of unemployment relief, even while this state is becoming an epicentre of the virus.

“We need leadership who will speak truth to power — no matter who sits in the Oval Office,” campaign spokesman Guy King added. “This moving of the goalposts is little more than blatant political maneuvering and proves again that Senator Graham cares far more about defending those in power than helping the families of South Carolina. This cavalier posture is especially troubling from a senator representing a state near last place in coronavirus testing.”

Harrison has been stepping his game up with his ads and he’s not just slamming Graham’s records. He’s running on real issues like police reform:

Jaime Harrison has released an ad about the need for police reform and accountability, addressing it to his sons as he seeks to unseat Sen. Lindsey Graham (R) in their South Carolina Senate race.

The “My Community” ad is narrated by the Black Democrat who has raised millions in his bid to replace the GOP senator who is closely aligned to President Donald Trump. Recent polling has shown that the race is competitive with the politicians tied at 42%.

In the two-minute clip, he addresses his two “amazing Black boys” and repeatedly asks how he will tell them about a world that views them as threats.

“How do I explain to my two little boys they could be treated differently because of the color of their skin?” he asks as his words are seen on-screen over images depicting his children.

“It’s my worst nightmare to know what could happen someday while they’re walking home from the store, jogging in the neighborhood or being pulled over by the police. How do I tell them that this prejudice could incite those who are sworn to protect and serve them to one day hurt and kill them? How do I tell them?”

Let’s keep both these ads on the air. Click here to donate and get involved with Harrison’s campaign.


The End of White Politics: How to Heal Our Liberal Divide (Hardcover) 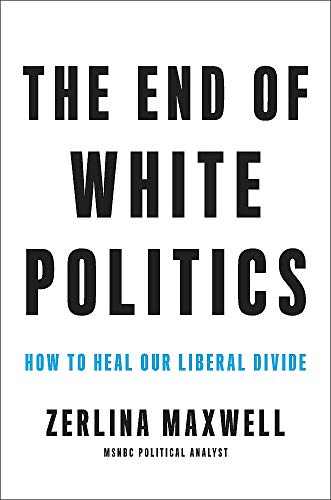