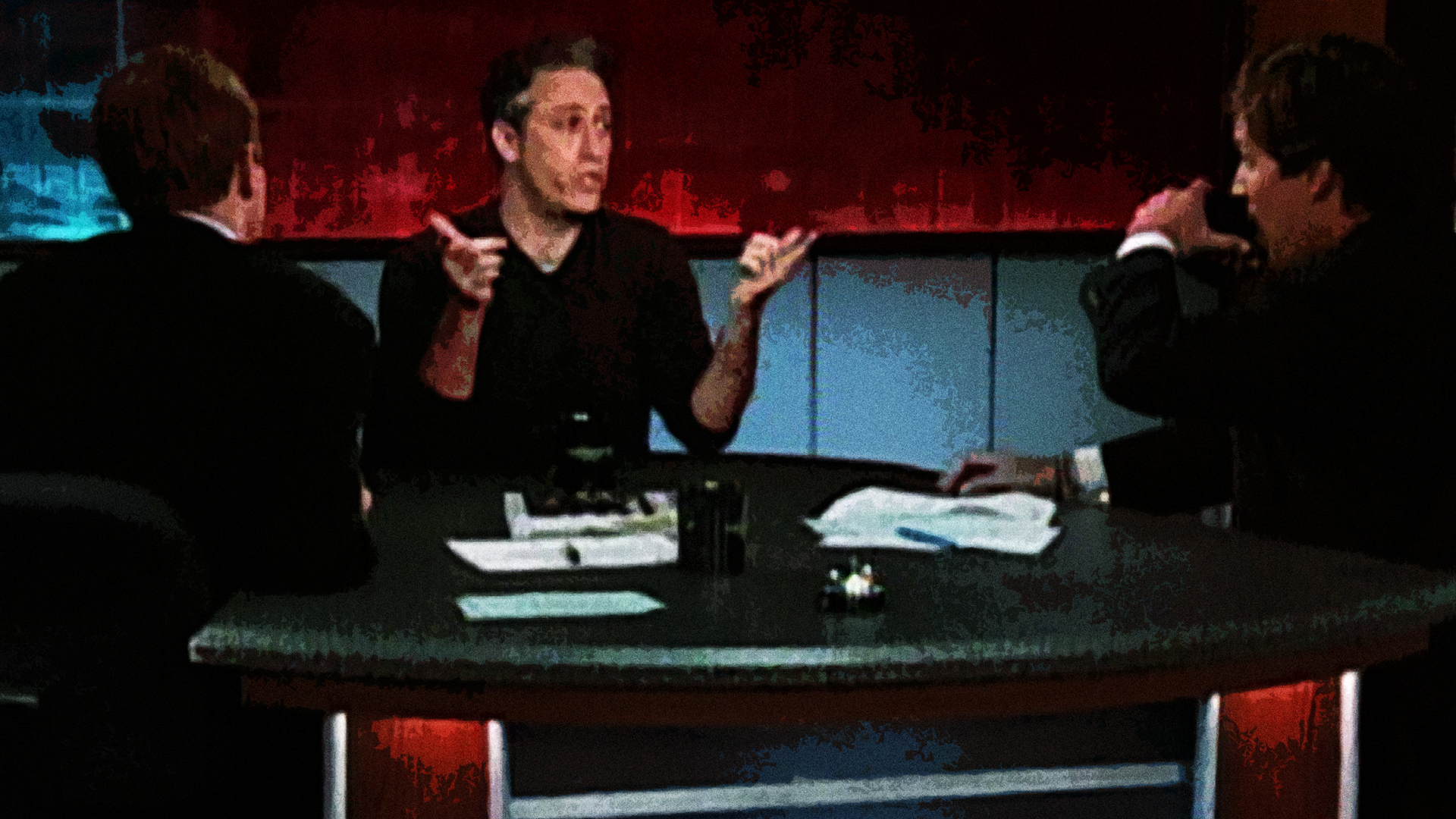 Not sure if you remember the infamous Jon Stewart Crossfire appearance in which he basically burned the erstwhile CNN show to the ground.

Okay, “burned to the ground” is a metaphor, but it’s not really hyperbole. Just months later, CNN canceled the program, 86’d cohost Tucker Carlson, and actually cited the former Daily Show host’s criticism of the show in its decision.

It was a stunning rebuke of Carlson’s oxymoronic blend of pugilistic pusillanimity, but it was also a welcome sign that cable news was about to get more serious. (Ha ha ha ha ha ha wipes away tear ha ha ha ha ha! Oh, damn, we were naive beyond all reason and decency, weren’t we? I want to go back in time and beat 2004 Aldous into a coma with a towel full of Trump hotel soaps.)

Upon the show’s cancelation, The New York Times summed up the decision of new CNN President Jonathan Klein to do away with it:

Mr. Klein specifically cited the criticism that the comedian Jon Stewart leveled at “Crossfire” when he was a guest on the program during the presidential campaign. Mr. Stewart said that ranting partisan political shows on cable were “hurting America.”

Mr. Klein said last night, “I agree wholeheartedly with Jon Stewart’s overall premise.” He said he believed that especially after the terror attacks on 9/11, viewers are interested in information, not opinion.

“Crossfire” may be continued “in small doses” as part of the political coverage on CNN’s other programs, Mr. Klein said.

Of course, as you know, Tucker Carlson only got worse. Freed of the surly bonds of reason and consensus reality after signing with Fox News, the network and the ninny commentator grew together in their shared dickishness.

Back in 2004, when we were all convinced we were living through the errant reign of the worst president any of us would ever lay eyes on, Stewart held his Spock tricorder up to Carlson’s soul and detected a massive black hole arrogating to itself a small galaxy of swirling dicks, all contributing to his own massive dickishness.

And then Stewart let loose …

After being challenged for nearly 13 minutes over his lame shtick, Carlson eventually blurted out, “I do think you’re more fun on your show; just my opinion.” To which Stewart responded, “You know what’s interesting, though? You’re as big a dick on your show as you are on any show.”

That was a long time ago, and you could forgive Stewart if he’d forgotten about the whole thing. But, no. There’s always time left in one’s life for atonement, and Stewart is now ready to apologize in the wake of Carlson’s recent troglodytic take on women in the military.

I called Tucker Carlson a dick on National television. It’s high time I apologize…to dicks. Never should have lumped you in with that terrible terrible person.

For the nontweeters: “I called Tucker Carlson a dick on National television. It’s high time I apologize…to dicks. Never should have lumped you in with that terrible terrible person.”

See? Joe Biden is unifying us already. Dicks and citizens, sitting side by side, united in their hatred of Tucker Carlson.